Kansas State baseball moved its record to 10-9 this season with a series win at home against the University of Texas Rio Grande Valley over the weekend in Tointon Family Stadium.

Junior Chris Ceballos collected five RBIs for the Wildcats in the series, including a pair of home runs, but K-State committed five errors in the final game of the series, allowing UTRGV to snag a win for a final standing of 2-1.

The Wildcats won the opening game of the series with UTRGV 3-1 on Friday, backed by dominant pitching. Freshman Griffin Hassall pitched 4.2 innings, striking out seven and only allowing one run on four hits.

The bullpen threw 4.1 scoreless innings, with sophomore Andrew Stratman earning his second win of the season. Junior Caleb Littlejim struck out four in two innings of work, and senior Mitch Zubradt collected his fourth save of the season.

Junior Cameron Thompson went 2-4 with two runs, and RBIs from senior Thomas Hughes, sophomore Zach Kokoska and Ceballos were enough to secure the win for the Wildcats.

On Saturday, the Wildcat offense erupted in a 7-1 victory to secure the series win over the Vaqueros. A two-run second inning and a three-run third helped the Wildcats to their dominating win.

Ceballos had a hot bat on Saturday and collected four RBIs with two home runs. Junior Dylan Phillips hit a solo home run, his third of the season. Freshman Jordan Wicks earned his third win of the season with 6.1 innings pitched and only allowing one run on five hits with six strikeouts.

The Wildcats failed to get the series sweep as UTRGV took the final game 6-5 on Sunday afternoon. The Wildcats were held scoreless after the fifth inning, leading 5-3, but gave up runs in the sixth, seventh and a solo home run by senior Anthony Gomez would give UTRGV a 6-5 lead. Phillips was the losing pitcher after giving up the game-winning home run to UTRGV.

K-State committed five errors in the final game and allowed two unearned runs due to errors. Despite the win, UTRGV left twelve runners on base in compared to the five left on base by K-State.

The Wildcats will have a two-game series at home against Canisius on Tuesday and Wednesday at 3 p.m. before traveling to Stillwater, Oklahoma, to open the first Big 12 Conference series of the season on Friday against Oklahoma State.

Bat Cats win series three out of four against Stanford 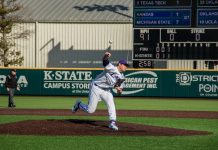 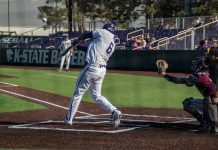