Home Culture Feature All night long: Why students study in the Union after dark

As it gets closer to midnight, most would probably expect the Student Union to be as empty as the sidewalks on the Kansas State campus. Though the stores and shops have closed, the Union is far from dead — it simply has a different type of energy.

While other buildings on campus often close for the night, the Union is open 24 hours a day, Sunday through Thursday when school is in session.

For many students, the late hours of the night are the best time for studying. The areas that are usually crowded during the daytime are free game, and the noise levels go down significantly. The Union gives a space for students to study in if they can’t (or don’t want to) study at home.

Nancy Lopez, sophomore in finance, said the Union is the perfect place to study at night, and she could easily stay there as late as 2 a.m.

“I usually just come here to study,” Lopez said. “It gives me an atmosphere where I can actually concentrate. Where I live, there are a lot of distractions sometimes, and this place just offers a different atmosphere.”

The Union also hosts a lot of club meetings and other events for organizations that can end late in the evening, and some of these students remain in the Union even after their event is over.

“I was here for a meeting, then I stuck around afterward because I had some stuff to get done,” Whitney Gutsch, junior in psychology, said. “I am not super productive in my apartment, and I can get things done here.”

With so much studying to do in college, many students at K-State prefer to study in a public space free from the fun distractions of their residences. Katherine Spencer, freshman in elementary education, is one such student.

“I had study hours with my sorority, and they tend to run late,” Spencer said. “I focus better when I am in a public place than when I am in my dorm.”

Whatever the hour, the Union always houses students in need of a place to buckle down and focus on studying. 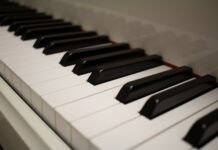