While students’ motivation may have been slowing down in the brutally cold weather before spring break, business at the Varsity Truck in Aggieville was still going steady on March 7. The eatery is located in a food truck behind the Varsity Donuts storefront.

Laci Moore, Varsity employee and senior in secondary education, said she wanted to work at the truck because of the people. Even in the cold, she said there hasn’t been a shortage of customers for her “people watching.”

“Even on our coldest days, it’s amazing what people will wear or do at the truck,” Moore said. “There’s a lot of different kinds of people that come to get the food.”

Moore has been working at the truck for two weeks, but she said her short time there has already been defined by several crazy encounters, mostly with intoxicated individuals taking a break from a night out.

In this K-State club, member make bread, but better friends

“We had one guy throw $31 in the window as a tip,” Moore said. “He was stalking around the truck forever yelling through the windows, and we were like, ‘We don’t know what you want!'”

Moore said she loves working at the truck, and apparently customers feel the same way about her.

One avenue to the Varsity Truck is through an alley connected to Moro Street. In recent weather conditions, this alley has often been covered in a thick sheet of ice.

“I almost slipped walking back there multiple times,” Kirby Krumsick, sophomore in social work, said. “But honestly, the grilled mac ‘n’ cheese was worth the risk.”

Moore said a typical night at the truck includes ebbs and flows of business.

“It’s a lot of ‘hurry up and wait,'” Moore said. “A lot of times there’s a lull, and then usually later in the night we’ll get crowds of people. Some are super crazy, but others are really chill.”

Morgan Gantz, senior in animal sciences and industry, said the Varsity Truck is a great spot to visit if you’re hungry and not sure what to do with your night. She and some friends stopped by the truck that Thursday to fill a lull in their plans. She said they didn’t spend much time out in the cold.

“There was no line when we went. Score!” Gantz said. “They were super fast and friendly as usual.”

While some students make their trip to the Varsity Truck the main event of the night, others find the truck to be a place to unwind and recharge for just a moment.

“I think my favorite part about going to the truck is getting off the main streets because it’s not as crowded as the bars,” Krumsick said. “It’s a nice way to get some food and get away from the chaos of Aggieville.”

While it may be relatively chaos-free, one thing the Varsity Truck can’t protect customers from is the cold. Still, that doesn’t seem to stop them from coming. 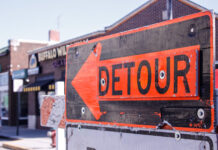 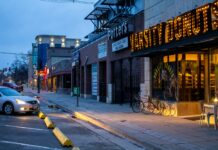 What police wish students would know