On the night of March 7 — just before spring break at Kansas State — Mojo’s Beach Bar attracted an unusually small, quiet crowd for a bar in Aggieville.

At the start of the night, about a dozen people clustered into the tropical-themed bar — not necessarily the crowd you might expect to see on a “Thirsty Thursday,” but Mojo’s isn’t the most well-trafficked bar in the first place.

Mojo’s is located on the outskirts of the Aggieville business district, and with many students already on their way to the real beach for spring break, the number of “shark shots” the bar was expected to serve that night was minimal.

Then again, a low profile might be exactly why a handful of customers were there in the first place. The bartender said about half of them were regulars, and the other half were the kinds of students who wander in and out of Aggieville’s many bars for variety. The regulars all knew each other and the bartenders by name, and it’s where many of them met each other and became friends.

“It’s very much a ‘college dad’ bar,” Rey O’Rourke, a recent K-State alumna, said at the bar. She said she usually goes to Mojo’s with a couple of her coworkers from Tallgrass Tap House, but that evening, she was just there doing some “people watching.” She said she likes the campy atmosphere and “rad music” the bar plays.

On the other end of the bar, a loud rendition of the chorus to “Whatta Man” by Salt ‘N’ Pepa and En Vogue broke out. Lleran Johnson and Zac Throneburg, two other recent K-State alumni, were between the bar and jukebox, shifting between playing darts, sipping beer and belting out songs.

Since the two graduated years ago, they have remained regular customers.

“It’s not really your average college bar,” Throneburg said. “It’s like that kid at school who does their own thing.”

The pair agreed Mojo’s wasn’t all that busy at the time, but it was still early. In the meantime, the pair indicated there was still plenty of time for dancing.

“It’s the one bar that you’ll hear ‘My Heart Will Go On’ at, and everyone will still be dancing and singing along off-key,” Johnson said.

Little Italy in the Little Apple: New Italian restaurant to open in Aggieville 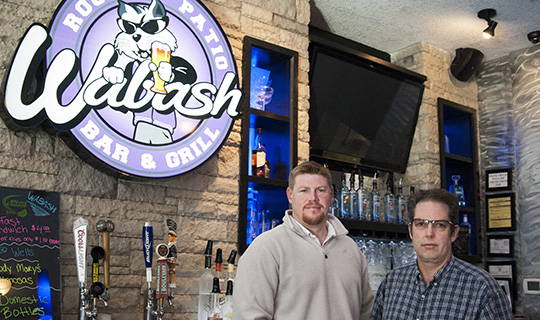