On Tuesday evening, students gathered in the K-State Student Union Ballroom for “See Your Words,” a poetry reading by accomplished poet Denice Frohman. Before the event, the crowd had camaraderie; friends chatted and hugged others who had just entered the room. Some women danced and lip-synched to the pop songs playing overhead. A community convened, and Frohman didn’t seem out of place — she took the stage in jeans and a sweatshirt that said, “Books saved my life.”

Frohman began her reading by sharing some literature written by Gloria Anzaldúa, who Frohman said epitomizes “the power of using language and using your voice as a tool for liberation.”

“Poetry is an invitation to fall in love with your voice,” Frohman continued.

Frohman performed poems about her abuela, appreciating street vendors, her first kiss and speculation on what cockroaches must think of humans.

Interspersed within and in between Frohman’s poems were jokes, dance moves and vibrant statements that resounded with the audience. Many laughed during “Doña Teresa and The Chicken” as Frohman recounted a memory of her grandmother butchering a chicken.

“It ran around the backyard, flapping / its black-feathered wings for mercy, for god’s / attention, but Papa Dios knew better / than to get in between a woman / feeding her grandkids,” Frohman recited.

Just a Friendly reminder that our amazing speaker Denice Frohman will be performing Tonight in the Union Ballroom from 6pm-7, it's free and inspirational We hope to see you there! pic.twitter.com/BHCiNwGDrt

At one point, Frohman asked the audience to raise their hands if they write things that they care about. About half of the attendees raised their hands. When she asked how many people in the room were writers, the number of hands in the air lessened.

Frohman pointed out this disconnect and jumped into a story: She said she first started writing poetry during her freshman year of college.

“I didn’t call myself a poet for like three, four years, not until my senior year … because I thought, ‘I’m not good enough,'” Frohman said. “‘That’s not me. That’s somebody else.’

“I left high school with a pretty damaging conception about how Latinx people did not write poetry,” Frohman continued. “We didn’t write books. Because I wasn’t exposed to that, not any of that in my high school classes, my middle school classes, elementary school. … I really had to spend a lot of time unpacking why I didn’t step into the power of my voice.”

Frohman also talked about her experiences as a queer Latina woman, social media and perfectionism, how other women impacted her and her desire to find wisdom in the natural world when violence occurs. Sometimes her words were followed by snaps and affirming statements from attendees.

Naydelin Barrera, junior in secondary education and Spanish, said she attended Frohman’s reading because she likes poetry, particularly slam poetry, and because her friends told her to come.

“There were some [poems] more than others that just really hit home for me,” Barrera said. “Like when we were talking about heritage, about parents and about the people that came before us, and those are some things that I really relate to.” 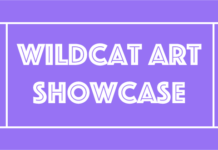 Kat’s Corner: “Ode to a Moth Squandered by Rain”