Every year, as temperatures start to drop in late November, Green Apple Bikes volunteers begin bringing bikes into the repair shop downtown for maintenance and protection from the elements during the winter months.

Now, almost 160 refurbished Green Apple Bikes have rolled out of hibernation and into bike racks around Manhattan on Saturday.

Jonathan Rivers, director of Green Apple Bikes, said he wants the Manhattan community to know where their bikes come from. The organization is privately funded and maintained by volunteers.

“[Green Apple Bikes] is sponsored and paid for, not by government, but by businesses, individuals and organizations that contribute funds directly to us,” Rivers said.

No matter who is paying, Rivers said reminding the public to take care of the bikes is always important.

“Just treat them nicely,” Rivers said. “It can be a little frustrating when bikes are damaged, especially for our volunteers, but by and large, people treat our bikes really well.”

Green Apple Bikes is a public bike-sharing program providing free rental bikes to the city of Manhattan. While Rivers acknowledged that dealing with damages is just part of the job, he also said he’s seen increasingly better treatment of the bikes over the years.

“They get used, and they get loved,” Rivers said.

Green Apple Bikes has a team of around 12 consistent volunteers and many more community volunteers who consistently report abandoned bikes and spread the word about the organization.

“It’s so special because we have all these volunteers who come alongside us that make the program work,” Rivers said.

Rod Harms and Jon Wilson, two community volunteers for Green Apple Bikes, said they go out on most Saturdays to hunt down misplaced bikes and replenish the racks. Harms said they’ve developed a routine during their time volunteering.

“We know from experience where bikes tend to show up,” Harms said.

On Saturday, the pair, along with several fraternity volunteers participating in a weekend of service, loaded up their cars and trucks with bikes and dispersed them throughout all the racks in the city.

Andrew Kofoid, freshman in business administration, was riding one of the bikes on Saturday with some other students. Kofoid said Green Apple Bikes create opportunities for fun with friends, and he was enjoying the nice weather.

“I think they are a great addition to this community,” Kofoid said.

Harms said his eye for green and white bikes doesn’t rest the other six days of the week. He said his volunteer work is a passion project and a “nice mental health break.”

“I go out most days and respond to the reports,” Harms said. “It’s like a fishing trip to me.”

Providing the public with free bikes which don’t include locks or GPS trackers has some drawbacks. Rivers said that, while Green Apple Bikes does keep track of the bikes, some occasionally go missing.

“Some people hold onto them, which is perfectly fine,” Rivers said. “We understand that people need transportation, and for some, we are their resource.”

Harms said he occasionally finds groups of bikes hidden together in back alleys and open garages.

“Nineteen bikes is our record in one location,” Harms said. “We called in some reinforcements that day.”

Harms said the Manhattan community regularly contributes to the hunt for misplaced bikes. On the Text Free app that Green Apple Bikes uses, volunteers have received reports of bike sightings from over 1,500 individual telephone numbers.

Harms added that Green Apple Bikes can always use more volunteers to make the process even smoother. Both he and Rivers said help is always appreciated.

“If you see a Green Apple Bike, text the number on it,” Rivers said. “We’ll take it from there.”

With all the green bike racks in the city freshly stocked for the spring, Rivers said he’s excited to continue his mission of making Manhattan more accessible to people with few transportation options.

“What better way to explore the Little Apple than on a Green Apple Bike?” Rivers said.

To report a bike that is damaged or left away from a bike rack, text 785-380-5968 and visit the Green Apple Bikes website for more information. 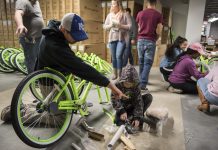 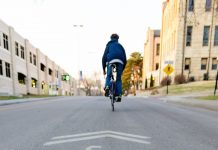