After 24 hours of fundraising, the Kansas State University Foundation raised $320,155 from 1,428 donations by K-State alumni and friends in all 50 states for the Cats’ Cupboard food pantry.

“It was exciting, energetic, fantastic,” Erin Bishop, Cats’ Cupboard coordinator, said. “It was a busy day. We had an open house and Dillons came to present us with a check. Overall, very exciting with lots of energy.”

The 24-hour fundraising event, called All In for K-State, was the first of its kind for the university. The KSU Foundation announced it is planning to make this an annual event that will impact multiple areas of campus, so Cats’ Cupboard will be only the first organization to benefit from it.

“The day more than met our expectations,” said Eric Holderness, associate vice president of development for the KSU Foundation. “The energy at the KSU Foundation, at the Cats’ Cupboard and around the country was amazing. The All In for K-State concept proved to be motivating and fun for donors to participate in making an incredibly significant impact. We are excited about this year’s success and can’t wait to see what the K-State Family can do next year.”

Kansas State day of giving. Give what you can, if you can. https://t.co/y5ABgZ1R5i

Twitter was a hot bed of activity as K-State faculty, staff and alumni shared their donations with the world. Eric Stonestreet, K-State alumnus and actor in shows like “Modern Family,” asked his followers to donate if they were able. The KSU Foundation’s Twitter page featured photos of employees holding signs thanking various donors and volunteers.

Alongside individual donors, some companies donated to Cats’ Cupboard, with Dillons contributing the largest amount.

“Dillons donated $50,000,” Bishop said. “We’re also donating $10,000 to Cats’ Corner at K-State Polytechnic in Salina. It’s basically the equivalent of us there along with a career closet.” 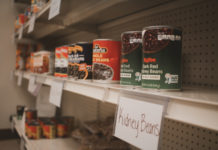 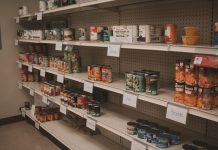 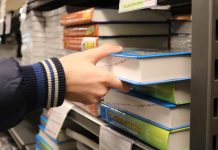