Home News Campus Get rid of your purple: K-State merges with University of Missouri just...

Although it was certainly surprising, a large amount of students and faculty members were reported shrugging and nodding with understanding when they heard about the recently announced merger between Kansas State University and the University of Missouri.

The reasoning behind the merger seemed to make perfect sense to most K-Staters: both parties involved wanted to spite the University of Kansas.

“I laughed when I first heard the idea,” Billy Wildecatt, freshman in open option, said. “I honestly don’t have a problem with it, though. Mizzou always seemed like a great institution to me, and our alliance with them against KU often goes unspoken, in my opinion.”

According to a press release, K-State and Mizzou will no longer be separate institutions. Rather, the two universities will combine to be two parts of a whole: TUMTSKU, or The University Made To Spite KU.

Some administrators have raised concerns that TUMTSKU is too explicit, so a joint committee between the formerly separate schools will be formed to create a new name for the university soon.

Audrey LaTigre, junior in leadership studies at Mizzou, said she thinks this is a great problem to have.

“Coming up with a new name for our joint university is a great first step,” LaTigre said. “I think it will promote unity between the two segments. I always thought there should be more unity between different universities.”

The idea for the merger came about after many years of the Wildcats and the Tigers realizing that they didn’t really care if the other men’s basketball team did well in their season, as long as KU lost.

Pete Wildecatt, Billy’s father and a 1982 K-State graduate, said he and other alumni are pleased by the merger.

“When the Tigers return to the Big 12 [Conference] later this year, I’d really like it if my school beat them,” Pete said. “But you know, as long as KU loses, I’ll be fine. I think the merger is a great idea, and really shows unity between universities and the importance of education in the midwest.”

Jay Hawkins, sophomore in political science at KU, said the merger makes sense to him as well.

“It’s not like I have friends at either institution,” Hawkins said. “All of my friends went to KU, the right school. The best university. This merger simply shows that they need to band together in order to feel like they’re better than us.”

Hawkins ranted for several more minutes about the superiority of his Lawrence-based university before concluding on the importance of unity.

“Also, I think it really shows how universities in the midwest like to work together and help each other, not alienate and separate from their peer institutions,” Hawkins said.

Administrators at the new TUMTSKU have announced nothing will change about how either university functions, just the name and logos. They will still have separate sports teams, but these teams will wear the same jerseys. The idea is that fans will be able to have two teams to cheer for and double the chances of beating KU in men’s basketball tournaments.

“What a wonderful idea,” said Chad Broker, 1987 K-State graduate in business administration and football studies. “This way I won’t be so disappointed when we lose the first time; we will have more of a chance.”

Broker said K-State has played a large role in his life post-graduation, so the merger is good for his ego.

“I went to K-State, and that’s most of my identity,” Broker said. “When we lose, it ruins my whole outlook on life for a few months or so. This merger will cut the likelihood of that happening in half. I’m thrilled about it.”

Administrators have decided the schools will share a single color rather than using yellow and purple together. The proposed school color of TUMTSKU will be a mixture of purple and yellow pigments, producing a sickly brown color.

However, some students have said the new school color is unpleasant.

“I’m pretty skeptical about the merger in general, and I really don’t like the new school color,” Kat Powers, senior in philosophy, said. “Although I’m a not KU sports fan, is this really worth it? I have lots of friends at KU from high school. Can’t we enjoy the competition in sports and not make our whole identities about it? I think KU is good school, it just wasn’t right for me. Is all of this really necessary?”

Other students were critical of the color in a different way. 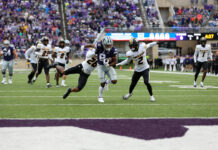 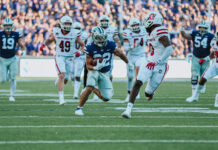