This weekend marks 45 years of history for Auntie Mae’s Parlor in Aggieville, and the local bar is celebrating with live music and other events throughout the weekend.

Aside from its craft beers and cocktails, Auntie Mae’s is known for bar trivia, open mic nights and live music events where it hosts local bands and musicians, and this weekend is no exception.

Auntie Mae’s has long been rumored to have been a speakeasy in the 1930s during Prohibition. The unique building hosts a basement bar that is a popular nighttime hangout joint for students and members of the Manhattan community who are 21 and older.

Jeff Denney, owner of Auntie Mae’s since 2008, said this weekend will have many special events over the next three days to celebrate its anniversary.

Friday evening will feature a jazz show with the Renaissance Jazz Group from 7 to 9 p.m.

“Saturday is a day for meeting up with old friends,” Denney said. “No special events, just hanging out with former employees and regulars.”

For Sunday, there will be a Bloody Mary happy hour starting at 11 a.m., followed by a barbecue lunch at noon. The weekend will wrap up with a CD release party and live performance from the local heavy blues duo The Blackbird Fields.

Denney said former employees will be traveling from five different states for the bar’s anniversary weekend.

While Denney has only owned the bar since 2008, his history with Auntie Mae’s goes way back. Denney first became acquainted with Auntie Mae’s in 1992 when he got a job as a doorman. He bought into the business six years later, and bought it out in 2008. The rest, as he says, is history.

“My favorite thing about owning Auntie Mae’s is the people: both employees and customers,” Denney said. “I have developed some of my best friendships with people I have met here over the last 27 years.”

Denney said he is passionate about the basement bar and its unique history, and he loves that the small venue allows him to give local bands a place to promote their music and support local talent.

David Longoria, senior in social sciences, said Auntie Mae’s is like no other bar found in Aggieville.

“Not only is it a former speakeasy and it looks really cool, but it also just has a different feel from any other bar around,” Longoria said. “I love the open mic nights. I’m biased as a comedian who performs there, but I love that we have a way to share our craft and have a place as comics that we can call home and know we can feel free to test our material.” 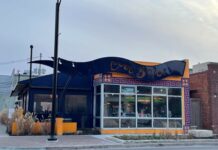 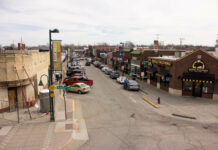 ‘It’s best to play everything safe’: Auntie Mae’s errs on the...