After talking to the students in Bosco Plaza who protested their presence on the Kansas State campus, three speakers hosted by the local chapter of Turning Point USA went up to the Bluemont Room in the Student Union for their scheduled panel discussion at the “Fighting for the First” event Thursday evening.

The panelists — Austen “Fleccas” Fletcher, DC Draino and Elijah Schaffer — each shared their personal stories and thoughts on free speech from a conservative viewpoint.

To start, Schaffer explained the point of the YouTube channel he runs, “Slightly Offens*ve.”

“The point is never to offend, [but] I hold the standard that the truth is offensive to many people these days,” Schaffer said. “It’s important that we never stop preaching it, never stop speaking on it.”

The microphone then went to Rogan O’Handley, who goes by DC Draino and runs social media accounts with the same name.

“I enjoy being offensive, because that is what free speech is all about,” Draino said. “If you are not uncomfortable, then you’re not learning [and] you’re not hearing new ideas.”

Draino then shared a story regarding his history as a student body president.

“I was a lawyer in Hollywood,” Draino said. “I went to Northeastern University and studied poli-sci and criminal justice. I was president of the student government there. Pretty liberal campus, and I was a well-known conservative — still got elected. That’s kind of fueled what I do now.”

Draino concluded by saying why he wants to continue preaching conservative values.

“When you have the right ideas, they’re universally accepted,” Draino said. “A lot of people that are against conservatives, against Republicans, just don’t fully understand what they’re actually for.”

Fletcher then took the microphone and said he started his YouTube channel, “Fleccas Talks,” when he saw the political divide emerging during the 2016 election.

“I created my channel to show people that it doesn’t take much to get involved politically,” Fletcher said, “if you have a microphone and a spoon.”

Later on, Schaffer described his experience with “diversity training” where he used to work. In this space, he was one of just a few white men, and Schaffer said the attendees of the training exercise were labeled on a spectrum from oppressed to oppressor.

“This is where I got introduced to this idea of intersectionality, which is the area where everything intersects except for logic and truth,” Schaffer said. “I’ll tell you this, that what we’re fighting against, and what they’re fighting against, is so that other people don’t have to feel the way that I felt in that room, that your voice doesn’t matter, that you’re useless. I wanted to get on board with that.”

Schaffer then shared his response to the diversity training.

“I spoke up and I shared and I said, ‘There are people out there that don’t agree with this,'” Schaffer said. “‘I don’t agree with this. I don’t think I should be in a group based off of my skin color and my gender. I don’t think that I should separated from people based on how much of a victim I am. I think that individuals should be judged by the merit of their character.'”

Draino described a time when he declined an offer to become a law partner in Hollywood and instead chose to stand up for what he believed in and start his conservative Instagram account. He encouraged others to take stands as well, though not necessarily in the same way.

Fletcher said he thinks the best way to navigate the complex political climate of today is to engage with people who are not particularly involved in politics.

“I think that’s the case for a lot of people, especially in colleges,” Fletcher said. “Basically, we’ve been put in our echo chambers for all these years, and we’ve dehumanized both sides in a way. The people on the left who don’t follow politics think politics boils down to the bigots versus the non-bigots.”

During the Q&A session afterward, Draino was not shy about sharing his positive view of the United States.

Schaffer then encouraged those in attendance to live out the values that were discussed.

“It’s case by case and it’s place by place,” Schaffer said. “This can be really heavy, because, for one thing, I can be up here just telling you, ‘Oh yeah, you should just do this.’ That’s your job.”

After the event, Fletcher gave his thoughts on free speech.

“Free speech to me is open dialogue, engagement and the goal is to unite people,” Fletcher said. “Have their ideas presented, and then other people can either change their minds or throw out a better alternative and then maybe the people with the idea originally will change their minds.”

After the recent Collegian report about Turning Point’s national organization trying to influence student elections at K-State was briefly brought to his attention, Fletcher said he wasn’t too familiar with the situation, but gave his initial thoughts.

“I personally like a free market, a fair market,” Fletcher said. “If someone wants to run for class president, or office, regardless of their political views, if they can win with their ideas and have an equal opportunity to be heard, as well as everyone else running against them, I’m happy. If there are limits pushed and there is influence outside of that, I’m not cool with that.”

Fletcher said he overall enjoyed his time on K-State’s campus, even with the protesters. 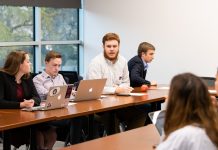 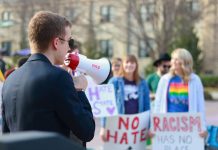