This unique line from Shakespeare’s “Taming of the Shrew” was the premise of a talk given Thursday.

Sheila Cavanagh, English professor at Emory University in Georgia, came to Kansas State to present an analysis of food during the Elizabethan era, the period of time when Shakespeare lived and wrote, for the Live Ideas Lecture. The event took place in the Big 12 Room of the Student Union.

The “neat’s foot” mentioned in Shakespeare’s’ play is actually the modern-day cow foot, and it was used to help heal ill children.

“Awful meats,” or organ meats, were generally for the lower class but became increasingly popular with the upper society during the 16th century only to fall out of favor by the 17th century.

Cavanagh highlighted how hospitality and feasts were a crucial part of upper society social life during that time.

“Hospitality brought praise and esteem to their providers … and no event brought greater hospitality than a feast,” she said.

Feasts generally included exotic fruit and vegetables from foreign countries, but these items were too costly to be props for Shakespeare’s plays, Cavanagh said. However, Cavanagh said audience members of his plays still understood the characters’ high-class roles.

During the talk, Cavanagh referenced many texts of the time, which is the theme of all Live Ideas Lectures. The goal of such lectures is to have “speakers focus on primary texts that can inspire us and help us better understand our world,” according to the Live Ideas Lecture Series’ webpage. 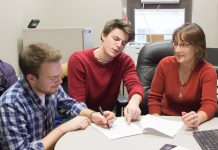