Anna Marie Wytko, associate professor of music at Kansas State, performed her father’s composition, “The Loveliness of Air (I Can’t Breathe),” for an audience at the Beach Museum of Art on Thursday night. The work is an electroacoustic piece based on written pieces by child Holocaust victims.

“It’s the most special type of performance experience a person can have,” Anna Marie Wytko said of performing her father’s work. “My father has been my greatest mentor as a musician, as well as a person, so it’s been a very special experience to collaborate with him on this piece.”

The piece is a 16-movement, hour-long composition combining recorded synthetic sound and narrations of the children’s words with acoustic saxophone and percussion. While Anna Marie Wytko’s primary live instrument was the saxophone, the piece also incorporated her talents on the drums, chimes and a hammer on a block of wood.

While the piece was performed in darkness at the Beach Museum, Joseph Wytko said other performances have involved intense lighting effects to mirror the musical elements.

Beyond the music, Joseph Wytko, the composer, said the composition is his attempt to convey disgust with the events of the Holocaust and the ways that horrors like it continue today.

“We better quit putting stuff in the closet, and we better start talking about things like this,” he said.

Joseph Wytko said that the piece pays homage not only to those lost to the Holocaust but also to victims of slavery and segregation in the U.S.

“I wanted to create a piece of music that did not ignore a major sin in this country with racism,” he said. “I’m not trying to equate these things [the Holocaust and slavery in the U.S.], but I do think that fundamentally, it’s the same mindset that lead to them.”

Joseph Wytko said he’s had a chance to visit some of the prison camps that inspired the piece.

“I don’t think you can explain to another person what it feels like to be in one of those places if they haven’t been there,” he said. “I think maybe music, and other art forms, is the closest language we might have to conveying this.”

“The Loveliness of Air” moves from moments of high intensity and clashing chords to quiet and even silent sections.

Joseph Wytko said this constant movement enabled him to create a piece that conveys a variety of emotions.

“One must remain very engaged with the music and with the sense of expression from beginning to end,” she said. “Concentration is really important because it’s a continuous movement over an hour.”

Thomas Keller, freshman in music education, said both Anna Marie Wytko and the piece itself are incredible.

“[Anna Marie Wytko] is a performer through and through, so of course she killed it, but the piece was amazing,” Keller said. “I wasn’t expecting Joseph Wytko to talk beforehand and actually explain it. To have all of his background information was really cool, and gave a lot of context and made the piece more impactful.”

Joseph Wytko said the piece is his small way of spurring discussions about the state of our world and the way that people treat each other.

“I’m a musician, but this means something way more than music for me,” he said.

The Wytko duo said they will travel together and continue to perform the piece internationally in the future.

“The Loveliness of Air (I Can’t Breathe)” will be performed a second time at 2 p.m. on April 7 at the Volland Store in the Flint Hills in Alma. 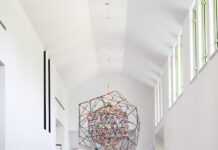