After beating Nebraska and winning the series against at-the-time No. 17 Texas on the road, Kansas State baseball beat No. 19 TCU in two of three games.

Freshman pitcher Griffin Hassall started on the mound for the Wildcats on Thursday night where K-State beat TCU 7-4. Hassall’s 7.2 innings was a career-high for the right-hander and earned him his second win with the Wildcats.

In the first game on the series, TCU struggled against Hassall striking out five times and drawing one walk. Hassall retired nine straight hitters at one point.

The Wildcats scored two more runs to stretch their lead to 4-0 in the bottom of the fourth. After a single to first, sophomore Zach Kokoska homered to left field and drove in two runs.

In the home half of the fifth, K-State’s offense scored three more runs off TCU’s Nick Lodolo who took the loss for the Horned Frogs. After two straight hits to start the inning, Brennan singled driving in junior Caleb Littlejim, this allowed Thompson to advance to third. On a groundout by Hughes, Thompson scored and the final run of the night was on an RBI from Spurlin.

The Horned Frogs got a run on the scoreboard in the top of the seventh off Hassall. Sophomore Andrew Stratman pitched 1.1 innings for K-State and gave up three runs. In the ninth, the Wildcats committed three errors and allowed TCU to get within three runs. K-State was able to get out of the inning and take the first game of the series 7-4.

In game two of the series on Friday, the Horned Frogs went after K-State right-hander junior Kasey Ford in an effort to even the series at a game apiece.

Ford didn’t even make it out of the third inning before being pulled after loading the bases without recording an out in the inning. The loss went to Ford after giving up three hits and being charged with five runs, four of those earned.

To start this game, TCU’s Jake Guenther reached on a fielder’s choice and Hunter Wolfe scored the first run of the game on an error. Thompson responded in the bottom of the inning with a leadoff home run. This was the only run the Wildcats would score in this game.

The next seven runs scored by the Horned Frogs were scored in the next two innings. In the third, TCU scored six runs against sophomore Jaxon Passino who inherited the bases loaded from Ford. Three of these runs were charged to Ford after failing to record an out in the inning.

Charles King was a huge part of the win for TCU throwing a complete game, giving up just one run to lead off the home half of the first. King gave up six hits over nine innings and struck out six Wildcats. King surrendered just two walks on the night but didn’t allow either one to score.

The rubber match on Saturday afternoon looked like it was going to go TCU’s way when the Horned Frogs scored six runs in seven innings.

Freshman lefty Jordan Wicks gave up five runs, four earned on eight hits in his first start after throwing a complete game shutout at No. 17 Texas. Wicks went 5.1 innings for the Wildcats and struck out three.

Senior right-hander Mitch Zubradt and Brennan were called on to try and finish this game for the Wildcat bullpen.

Brandon Williamson threw 6.2 innings for the Horned Frogs giving up three runs and striking out eight. Junior Chris Ceballos homered in the third putting K-State on the board.

After Wolfe hit a homer in the top of the seventh, K-State’s offense found its rhythm and scored four runs in the bottom of the inning. With the bases loaded, senior Rainer Ausmus was hit by a pitch with brought Hughes across the plate. Littlejim singled to center bringing two runs home. Brennan singled driving in Ausmus to bring the Wildcats within one run.

K-State scored five runs against TCU’s Marcelo Perez in the home half of the eighth. Ceballos drove in Kokoska on a double to left, followed by a bunt single from Ausmus driving in freshman Blake Burrows who pinch ran for Spurlin. Littlejim singled to center, scoring Ceballos, Thompson reached on a fielder’s choice, and Littejim scored on a single from Brennan.

Going into the top of the ninth, K-State was up 10-6 and looked like they were going to come away with the win, needing only three outs to seal the series.

Wolfe drove in Adam Oviedo on a single and Josh Watson walked which brought up Guenther who hit a three-run homer to center field. Brennan surrendered four runs in the inning and allowed TCU to tie the game at 10.

In the bottom of the ninth, Burrows walked, advanced to second on a single, on a passed ball advanced to third. With Ausmus up next, he hit a bunt single back to the pitcher but Burrows was able to score on the hit and gave the Wildcats the walk-off win 11-10 against No. 19 TCU.

Despite a record of 19-22, K-State has won two series against ranked conference opponents this season. Next up for the Wildcats will be a one-game series at the University of Nebraska-Omaha on Tuesday with first pitch at 6:30 p.m. 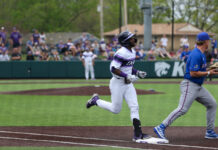 Red Raider offense too much for Wildcat bullpen