Update, April 23 at 11:46 a.m.: In the crime log for April 22, the Kansas State Police Department reported this incident as a two-vehicle, hit-and-run, minor injury accident that is under investigation.

Original story: A K-State student was the victim of a hit-and-run Monday evening at the intersection of Denison Avenue and Claflin Road.

Aaron Meyer, senior in food science, was driving south along Denison on his motorcycle when the incident took place, at approximately 8 p.m.

“I was just riding down Denison and came to the intersection of Denison and Claflin and a guy that was going to turn left decided at the end that he wanted to turn right and he went right through me on his way and I flipped over on my motorcycle, and here we are,” Meyer said. “But then my good friend Shelbi came and picked me up.”

Shelbi Emling, junior in human development and family sciences and pre-occupational therapy, happened to be driving by shortly after.

“I was just coming back from a meeting and I saw him on a corner and he’s a good friend of mine, so I stopped to make sure he was OK,” Emling said.

Meyer did not seem to have any serious injuries, only a cut on one knee. 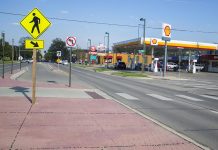