As the weather was in the 60s on Friday night, few people would have thought of camping out. Even fewer would have slept in a refrigerator box voluntarily.

“We wanted to raise awareness for the homeless and also fundraise towards them,” said Valeria Rubio, president of the club and senior in marketing, international business and hospitality management. “There are a lot of people in the community, especially the college community, that … are not aware of how many homeless people there are especially because we don’t see them.

“There’s a good amount of people that the Manhattan Emergency Shelter serves, and a lot of them are children, too, so we just wanted to raise awareness about homelessness,” Rubio continued.

The club was able to raise more than just awareness. In total, $1,500 and numerous canned goods were donated. The financial contributions will benefit the Manhattan Emergency Shelter and ShelterBox, an international disaster relief charity, while the canned goods will be donated to the Flint Hills Breadbasket.

“It’s a big commitment to stay a whole night outside, especially at this point in the semester,” said Taylor Stewart, junior in political science and service coordinator for the club. “We wanted to raise awareness for the event, but we really wanted it to resonate with people. I think by having it in the quad and having it so that people could choose to stay out really put the issue of homelessness in perspective.”

Helping to put the issue in perspective, Jessica Wilkus from the Manhattan Emergency Shelter and Katrina Lewis from ShelterBox spoke to students Friday night in Waters Hall about homelessness.

“It’s interesting to hear the statistics and how many people in the community utilize the shelter,” Stewart said. “We learned about the programs that the Manhattan Emergency Shelter offers just to get people on their feet after temporarily staying there.

“ShelterBox, we learned, does disaster relief specifically,” Stewart continued. “They go in and give boxes to people and communities that are disaster stricken. It’s really cool to see how they’re adapting resources to help out other people in different communities throughout the world.”

Matthew Swords, freshman in accounting, said he had participated in an event similar to this in high school. Swords said he wanted to continue serving the community in some capacity while in college, which is why he joined the K-State Rotaract Club.

“The speakers broke some of the stigmas about homelessness,” Swords said. “Especially ShelterBox helped to explain that homelessness is more than just circumstances that are within your control.”

This is the second time that this event has happened on the K-State campus, and Rubio said she hopes the tradition continues.

“I hope that participants have a better understanding of homelessness,” Rubio said. “Next time they see someone who’s homeless, I hope they could have more empathy towards them.” 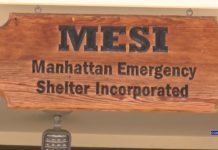 Making an effort to change homelessness in Manhattan