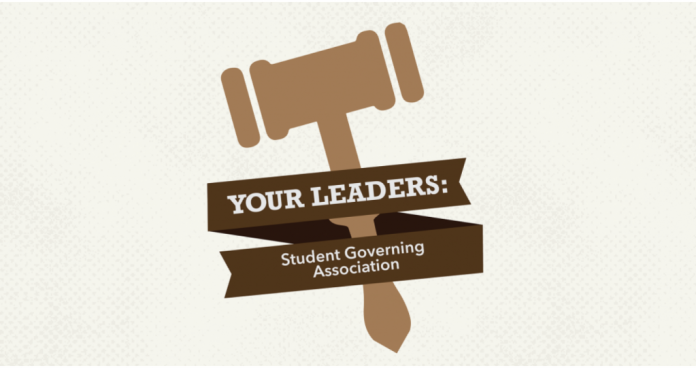 During the student senate meeting Thursday evening, the Student Governing Association heard from the CEO and president of the Kansas State University Foundation, debated plans for a campus-wide newspaper subscription and the goals for the executive and legislative branches for the term.

The priorities for the executive branch include focusing time and efforts to improve five areas around campus: food insecurity, sexual violence awareness, students well-being, student input and diversity and inclusion.

The priorities for the legislative branch include student engagement, diversity and inclusion, fee education and transparency and committee engagement.

These resolutions will be on the agenda during the first senate meeting in the fall 2019 term.

During open period, Greg Willems, KSU Foundation president and CEO, came to speak to students “about whatever they want.”

Nathan Bothwell, junior in communication studies and speaker pro tempore, asked how long the renovations to McCain Auditorium had been planned by the Foundation.

Willems said fundraising for McCain has been going on for a “long time.” He spoke about the student reactions to the project, citing the letters to the editor featured in the Collegian as a surprise.

“I suspected that awareness among the students was greater,” Willems said. “Frankly, I am surprised.”

Nathan King, junior in mass communications and student senator, asked how students can voice their concern to the Foundation when they learn about new projects being proposed by the university.

Another way for students to voice their concerns would include speaking to their college. Willems said the Foundation also tries to connect with SGA leadership.

Hayley Spellman, junior in political science and student senator, asked about the All in For K-State event hosted by the Foundation in March. The event raised over $240,000 in 24 hours, Willems said.

“We were really excited about the outcome,” Willems said. “When thinking about this initiative, we knew this was something that donors didn’t have experience with years ago. There wasn’t a problem with food insecurity, there wasn’t a food pantry. This is different.”

Willems said the Foundation will develop the concept of All in For K-State over the years and continue to support campus organizations. Many donors to the event were first-time donors.

The benefit to subscribing to the Mercury would be student engagement around the community, Lily Colburn, freshman in political science and intern program coordinator, said.

Before a decision is made, Karamali said he and Penny would see how many students would utilize the subscription and figure out a funding model. They will also take into consideration bias for each publication.

Karamali said the subscription model being offered for both papers is cheap as each student would only be paying 50 cents for a whole year’s worth of content.