Kansas State University welcomes students from all over the world. Asia, the Middle East and the United Kingdom are all represented in the backgrounds of students on campus. However, the number of international students is decreasing.

Grant Chapman, associate provost of international programs, said the process for a student to come here from another country is a long one.

Chapman explained that to come to the United States, international students must have an acceptance letter and prove they have funds to support themselves for a year, That includes tuition, rent and other miscellaneous expenses.

Having all of that documented is the first step to getting a visa to attend an American institution. International students must also interview at an international embassy to show their interest in coming to the U.S.

“Any one of those steps that involve mostly external factors — if any one of those factors may change, it may have an effect on their enrollment,” Chapman said. “And because this decline is national, we can say that many of the causes are external.”

Pat Bosco, vice president for student life and dean of students, said the market for international recruiting from China has become very competitive, causing a decrease in enrollment. However, in another part of the word, the Middle East, the decrease is from a different problem.

“We all know that the political climate has made it very uncomfortable and frankly unwelcoming for some of our Middle Eastern students,” Bosco said. “They are having a very hard time deciding on American universities in general.”

When asked about Bosco’s comments, Chapman said he believed it was just one of many factors.

Binghui Liu, a graduate student in mechanical engineering from China, said a lot of Chinese students come to K-State for two main programs —engineering and business.

“Students come from China for an engineering degree to find work here in America,” Liu said. “They get a business degree to go back to China, usually to work for a family company.”

She explained that those were the common approaches that she had seen in her experience here at K-State. As for her, she came to K-State because her father was friends with a professor that works here.

“This was my main choice,” Liu said.

The Office of International Programs is working to get K-State’s name out to more prospective students. They have started programs that allow students to experience just a small taste of life here.

“We have a brand new online course,” Chapman said. “Normally international students don’t take an on-campus visit. So, how do we talk about campus to get them excited to come to Kansas State? We are trying to replicate — although it’s virtual, so not as fun as coming to see the Union, going to a game or going to experience student life — what we think is important about Kansas State, what you should think about.”

International Programs have also released advertisement campaigns focused on the message “you are safe here.” They also created access to multiple languages in their resources, started offering English development classes for credit and have looked at how to push K-State’s name into places where it was not before. 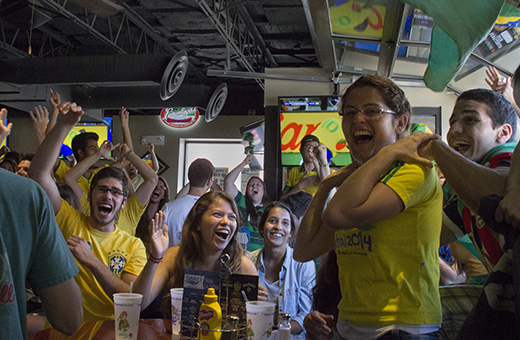 Soccer: a game without boundaries