Hunt alluded to the popular idea that it takes 10,000 hours to become a master at something. Holding the flute, he explained, “This is about the first 25,000 [hours] of my life.”

“I wasn’t expecting that, but it was really good,” Teresa Leiszler, senior in secondary education, said.

Hunt spoke softly, thoughtfully turned over ideas and paused to consider the words he chose. He often ended phrases by asking students to “think about that.” His speech centered around several lessons learned from his family, his work as a counselor and his faith.

The first lesson Hunt shared from his experiences going fishing was that “life is a tug of war.” He said people have “pathologized” the tug of war, attempting to medicate it away with mindfulness or self-improvement or the latest pop psychology trend. But in reality, life is difficult, and the tug of war is part of life, he said, and accepting the growth and challenge that can result is important.

Hunt then described the four attachment styles: secure, avoidant, ambivalent and disorganized. Hunt said each of these attachment styles defines how people interact with those around them — family, friends and significant others.

Hunt then described his solution to these problems: a life of devotion and prayer.

“Is this the best version of yourself?” he asked, while telling a story about a conversation with his son.

Asking ourselves that question allows us to point out where we might be going off course, and correct it before going further, Hunt added.

Hunt ended his speech with a reflection on humility. Hunt told students to stop comparing themselves to others, stop criticizing those around them and focus their energy onto more positive enterprises instead.

Andy Brandt, junior in English, said that as a result of the speech, he’d want to tell others “to evaluate how you attach to people and to assess your relationships and how healthy they are.”

When asked what he would want the rest of the student body to know, Hunt said students should focus on others.

“We live in a very self-oriented culture,” Hunt said. “But I think if we can lift our eyes up off the screens that surround us and the vitriol that’s all in our culture and just look at other people’s faces and begin to get to know them and connect with people, we can just be drawn into relationship with one another.” 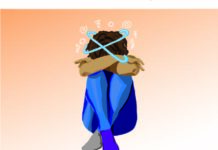 Hope through faith: Looking at the impact of seasonal depression and how some individuals combat it