The Morris Family Multicultural Student Center received input from students of all majors and backgrounds, and one of the many students involved in the planning process was Hilary Garrett, junior in mass communications.

Garrett has cerebral palsy — a disorder that affects movement, muscle tone and motor functions. That doesn’t stop her from being highly involved on campus, though.

Garrett was asked to join the Multicultural Action Team after being involved with the Student Access Center, which is located in Holton Hall.

The Multicultural Action Team, comprised of students, staff and faculty, contributed to the plans for the new center. The multicultural center will include three floors in a free-standing structure with a lower-level connection to the adjacent Student Union, and it will provide student meeting rooms, huddle areas, a community kitchen and offices.

“One of the particular ways I was heavily involved was with the overall design of the building so that it functions for other students with physical disabilities,” Garrett said. “I feel like with a multicultural center, we’re making one more step in the right direction, and it’s been great to be a part of that team and watch that come together. I’ve had a couple of different opportunities through the Student Access Center to be an advocate for students with disabilities.”

Garrett recently spoke at the diversity summit held in the Union to share her experience as a student with a disability on the Kansas State campus.

“One of the great things about a multicultural center coming to campus is [that it’s] another place where I can go and I can study and I can do what I need to do and be the best student I can be,” Garrett said. “It’s a central location on campus; it’s really easy to get to and it’s a great way for me to be able to study. It’s taken so long, but I’m so glad I’ve had the opportunity to be a part of this team; it’s been really good.”

With Garrett’s disability, she said she spends the majority of her time on campus in her wheelchair so she can “give 110 percent to being a student” and not worry about fatigue or pain. Once her classes are over and her homework is done, Garrett said she is able to devote more time to her body and the things she needs to do to get physically stronger.

Garrett met with the Multicultural Action Team many times to work with designers, construction workers, fellow students and staff, she said.

“[The designers] came in at different times and just said, ‘Here’s what we’re thinking, does this work, does this not work,’ so we had a lot of different meetings,” Garrett said. “Coming up with even the design of a center and the way a building should function and work is a lot, but I’ve enjoyed every moment of it.”

Garrett will still be attending K-State while the multicultural center is being built, so she said it is very likely she and the rest of the action team will be present at the grand opening.

“It’s really exciting; I didn’t know that this was going to be such a big thing, honestly, when I got involved,” Garrett said. “I like having the opportunity to use my voice and my experience. … [Making] things better for other people is what I most look forward to. I hope that, once people see the impact of this project, it’ll just move things forward and we can continue to make K-State better.”

The future site for the Multicultural Student Center was unveiled on April 29 on the east side of the Union. The center is a privately funded campus project in partnership with the KSU Foundation. The 2018 Homecoming Committee and the K-State Alumni Association presented a check for $10,000 for the center’s construction at the unveiling. 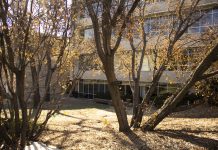