Matt Walters, a 1992 Kansas State graduate and a native of Russel, Kansas, is one of the sports announcers and sideline reporters for K-State, mostly famous as the man behind the microphone at many K-State sporting events.

From the early age of nine, Walters said he knew what he wanted to do with his life.

“What really got my attention was Mike Bush, who was a sportscaster in Kansas City,” Walters said. “‘Gurn McUrn’ is what he would say whenever a home run was hit. It just stuck with me. Later, I got interviewed in a free throw contest I competed in.”

Even as a child, Walters said he would find ways to prepare for the future he longed for.

“I would always take a radio with me when I was a little kid,” Walters said. “I started announcing high school football games when I was a sophomore in college. I played basketball and tennis in college and was part of the women’s basketball broadcast team for a while.”

Walters said the most exciting part about working at K-State is the people who give their all to their favorite sports.

“You get to work with great people,” Walters said. “You get to watch them and see them mature as a person and it’s good to stay in touch with them. Whether it’s working with [coaches] Chris Klieman or Bill Snyder, it’s just the people. If you don’t love working with people, it’s not the job for you. … Also, you’re not going to make millions with it unless you’re Jim Nantz.”

“[Walters] is absolutely one of the hardest workers that I have met over the years, displaying tremendous effort of whatever he was engaged in,” Hoyt said.

Wyatt Thompson, sportscaster for K-State and the “Voice of the Wildcats,” also works alongside Walters during football games.

“He is one of those guys who really cares about K-State,” Thompson said. “Whether he’s doing pre-game or post-game, he always is going to be prepared.”

Thompson said he also enjoys working with Walters because “it’s a lot of fun and he has a very fun personality.”

While Walters can be seen as a fun person, it is really his passion and love of people that sets him apart from those around him, Thompson said.

“At the end of the day, it’s all about the people,” Thompson said. “He takes in K-State and has a great sense and feel about what K-State is all about.” 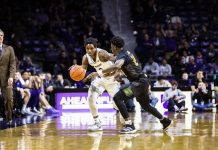