Editor’s note: These stories were originally published in March 1970 issues of the Collegian.

“I don’t consider myself a liberal or a conservative, but a moderate,” the speaker was SGA presidential candidate Pat Bosco.

“I’ll go either way depending upon the basic needs of students and as long as it’s a constructive cause,” Bosco said.

The thrust of Bosco’s campaign centers around his insistence that student apathy can be conquered by bringing student government back to students.

Since he announced as a candidate, Bosco has campaigned in every fraternity, sorority and dormitory in his quest for the student body presidency.

Bosco said he is enrolled in 15 hours of courses this semester and admits that sometimes the easy way to run a campaign and keep on top of the books is to study all night or at least a good share of it.

Always speaking in an enthusiastic and friendly tone, Bosco is quick to lay out the proposals point by point.

Bosco, who claims neither political party, has worked for a variety of candidates in his home state of New York, including Nelson Rockefeller, Robert Kennedy and Richard Nixon while maintaining a B-average in his academic world.

Bosco campaigned for Rockefeller when he ran for re-election as governor in 1964 and worked in the New York presidential primary for Kennedy just prior to the senator’s assassination. His work for Nixon included acting as a poll watcher on election day in New York.

“I consider myself as independent politically and as a great admirer of New York City’s mayor John Lindsay,” Bosco said.

BOSCO CAME TO K-State in September 1969 after graduating from the New York State Community Junior College.

Bosco said he applied to several colleges but chose K-State because of the personal attention university officials gave his questions.

“I am certainly not disappointed about my decision to attend K-State,” Bosco said. “Everybody in New York told me that Kansas people are all wonderful people and I have found this to be very true.”

Bosco said the fact that he came to K-State just seven months ago hasn’t been a liability.

Bosco’s previous experience include his participation in last fall’s Association of Student Government conference in Atlanta, Georgia, as a delegate from K-State. He was named outstanding student senator at his junior college.

The ASG conference dealt with the exchange of information between student government and the student body. Upon returning, Bosco delivered an oral and written report to the Student Senate about the convention.

He is recognized for initiating the “Vote-18” movement in his home state and assisted in organizing a “Vote-18 Day” in New York. He traveled in several New York cities as an attempt to bring people up-to-date on the issue.

“At the present time, Gov. Rockefeller has on his desk a “Vote-18-Week” resolution that I’m hoping he will sign soon,” Bosco said.

BESIDES SERVING in his previous college’s student senate he served as the social facilities chairman, orientation co-chairman and held a place in the elections and constitutional committees.

Bosco last year petitioned to stop unprecendented raises in tuition in New York state schools and served as vice president for student organizations for 33 community colleges in the Empire State.

He was quick to get involved in student government at K-State and aided in the organization of Black Awareness Week.

Bosco has stressed that his basic objective in running is to bring student government back down to the students.

“If elected, my first executive order will be to set up an action session to start researching what the real problems of the students are,” Bosco said.

“I want to visit every living group on campus and attend as many floor meetings as possible in hopes of discovering the needs of the students,” he said.

Another innovation Bosco suggests is that the student body president sit at the meeting table with Student Senate instead of away from senate during senate meetings.

“This would press that the student body president wants to work with the senate and would cut down animosity between the two branches of student government,” Bosco said.

His eight-point platform includes initiation of a new pass-withdrawal system which would enable a student to take a course and receive no failing grade.

“If he passes the course he receives a grade of “pass” and the credit hours for the course,” Bosco said. “If he fails the course he would receive a withdrawal and would not be penalized,”

On money matters Bosco has come out forcefully for petitioning the Kansas Board of Regents as well as the legislature, opposing the current rise in tuition and asking them to look elsewhere for future assessments.

On test book prices, Bosco has suggested the establishment of a committee composed of students, faculty and administrators to study possibilities of lowering prices for required test books to be sold at the new Union book store.

WHEN BOSCO HEARD of the University Forum the night before the primary election, he decided not to attend in lieu of campaigning in all the dormitories but wrote up a blueprint to go along with his platform for students that his campaign aides distributed at the forum.

In the blueprint, Bosco said he did not wish to stop the debate or stop students from attending but wanted to express that he has one basic goal that can be accomplished by bringing the issues to as many students as possible.

He has stressed in his campaign speeches and appearances the overwhelming need for students to get out and support their candidate of their choice whether it be himself of one of his opponents.

BOSCO REORGANIZED his campaign on Thursday night and said he went out doing the things he did before the primary.

“We are working hard to get the people out to vote and hopefully they will choose the right candidate.” Bosco said. “At the present time, I have 50 hard-core people working in my campaign,”

Bosco said his parents have never been greatly interested in politics or student government but are following this election very closely.

“My 17-year-old sister is very interested in issues and she reads the papers about student involvement,” Bosco said.

Bosco predicted that a new breed of student senators are at K-State and said they will be a great asset in returning student government to the students.

As far as his future aspirations are concerned, Bosco said he wants to teach in the inner-city following his graduation and plans to work on his master’s degree at the same time.

Bosco is an education major.

“I hope to go into the city and work on methods to alleviate poverty, and may eventually enter politics,” Bosco said.

Bosco reiterated his willingness to work in student government regardless of Wednesday’s election.

“I said from the start that I would work with any of the six candidates,” Bosco said.

-A complete Teacher Evaluation System to be conducted by each college under the supervision of the Educational Research Department.

-A committee composed of students, faculty and administrators to study the possibilities of lowering the prices for required text books to be sold at the new Union Book Store.

-To petition the Kansas Board of Regents, as well as the Kansas Legislature, opposing the current rise in tuition as asking them to look elsewhere for future assessments.

-Revise the present pass-fail system and initiate a pass-withdrawal system which would enable a student to take a course and receive no failing grade. If he passes the course, he receives a grade of “pass” and the credit hours for the course. If he fails the course he will receive a withdrawal and will not be penalized.

-A residence hall contract that will terminate at the end of each semester.

-To appoint a cabinet of concerned, competent students who have the interests of all K-State students in mind.

A record of 4,319 students voted in the special run-off election

The official results showed Bosco with 2,454 votes for 61 percent of the vote and Cleveland with 1,627 or 28 percent.

BOSCO CAMPAIGNED on an eight-point platform including complete revampment of teacher evaluation.

Bosco said he favors petitioning the Kansas Board of Regents and the legislature to solicit a decrease in the current rise in tuition.

Bosco said he will appoint a cabinet of concerned and competent students who have the interest of all K-State students in mind.

Bosco has said his first act as president will be an executive order setting up an action session to research the real problems of student government. He takes office March 17.

“FANTASTIC” was how Bosco summed up his victory. “It was a hell of a race and many people worked their rumps off.

“I just finished talking to Klorox and he is going to be on my cabinet,” Bosco said. “We need his help because he is concerned.”

CONTACTED shortly after results were final, Cleveland said he was glad to see the campaign end.

“It’s been a long hard campaign and I congratulate Pat for his victory,” Cleveland said.

Votes cast in this year’s special election exceeded last year’s run-off results by more than 1,000 votes. Thirty-four percent of the student body voted in this balloting, compared to 26 percent in this year’s general election. 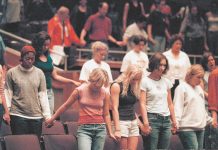