On Thursday night, the Overtime Grill in the Kramer Dining Center was filled with students paying board games or snacking on some free food provided by the Association of Residence Halls.

But everyone’s eyes were on the stage. The audience never knew what to expect when the next performer took the stage — a musical performance, spoken word poetry or comedy.

The Association of Residence Halls started hosting an open mic night this semester every Thursday from 8 p.m. to 10 p.m. The event quickly gained popularity and became a new way for students to get out of their comfort zone and show off their talents.

“It really allows people who are not in choir, or like theater people, to get up, talk to people and present the arts,” Sarah Carr, freshman in civil engineering, said.

Students went up one by one or in pairs to present their sets in a low pressure atmosphere. Some of the people who went up were crowd favorites and others were performing for the first time.

One of the first-time performers was Cecilia Reichenberger, sophomore in life science. Reicnhenberger performed a poem entitled “The Dash” written by Linda Ellis.

“It was kinda nerve wracking,” Reichenberger said. “I didn’t expect the amount of people that are here, but I thought it was a really cool environment.”

The come-and-go event featuring free food and drinks was kept on track by MC Ben Chaverin, junior in management. Chaverin even performed during the breaks.

“It’s a blast,” Chaverin said. “I look forward to it every week and it has been a great experience for me not only as a musician as well as getting up and talking to people and not getting as nervous.” 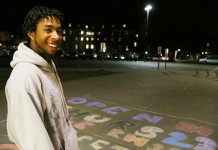 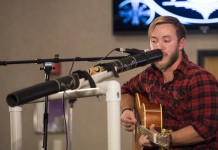