Roland Massimino, a Kansas State senior golfer from Philadelphia, is currently striving for greatness along with two of his teammates, senior Jeremy Gandon and junior Jacob Eklund as they compete in the NCAA regional golf tournament in Athens, Georgia Monday through Wednesday.

The three golfers are the only athletes representing K-State at the tournament.

Massimino said that he feels good, he has been working hard, and he thinks that he has been playing well lately, which has given him a big boost of confidence going into the tournament.

Out of high school, K-State was Massimino’s only major college golf offer. He got recruited from a junior golf event and said he has loved it here ever since.

Massimino did not play a lot during his freshman season. He has improved a lot throughout his four seasons, and during his last season — his junior year — he finished third on the team with a 73.74 stroke average.

He said now, during his senior season, being picked to play in the NCAA tournament is “a dream come true.”

Head coach Grant Robbins talked about how much he loves his team and how hard they have worked to get to this point as a group and individually.

“Roland has come a very long way,” Robbins said. “He has worked extremely hard to get to the point where he is today, and I couldn’t be more proud of him and everything that he has done up to this point. I can’t wait to see what Roland and his teammates accomplish in the tournament this weekend.”

Robbins said he feels like he has prepared everyone on the team.

This is Massimino’s first NCAA appearance, and he said he plans on making his mark during the tournament. After Tuesday’s second round, Massimino has earned a score of 9-over par 151, placing him in a tie for 49th place. 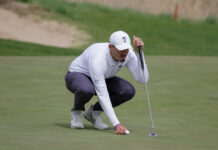