Riley and Pottawatomie County officials say residents should be prepared for evacuations in light of rising water levels and flood risk in the area.

Emergency services and collaborating agencies of the two counties held a media conference Tuesday to address the recent rising water levels and ongoing flood risk in the Manhattan area.

Pat Collins, Riley County emergency management director, said officials are monitoring the elevation and forecasts of Tuttle Creek Lake and surrounding rivers. Collins said it’s the goal of those involved to prepare residents to be ready in case of flooding.

“We don’t want to put any fear in people, but we need to motivate them to start taking action,” Collins said.

The team of officials from Riley and Pottawatomie counties is working to identify resources for those at risk of being displaced by flooding.

Brian McNulty, Tuttle Creek Lake operations project manager with the U.S. Army Corps of Engineers Operations, said the top level of the lake dam’s emergency gates is 1,136 feet. As of Tuesday morning, the lake’s elevation had just passed 1,133 feet. This puts the lake at 92 percent capacity.

Restoration in progress: A look inside Hale Library

“We’re continuing to monitor the situation closely,” Scott French, Manhattan Fire chief, said. “We’ve declared a disaster with the State of Kansas, however we are not in emergency operative action at this point.”

“Our forecast right now shows that we can easily manage what’s coming into the lake and keep flows within the channel away from the dam,” he said.

Jared Barnes, Pottawatomie County Fire Supervisor, said he heavily encourages the public to stay mindful of road signs and closures in the area.

Approximately 20 roads are closed between Riley and Pottawatomie counties, and Collins said officials anticipate seeing up to 36 total closures.

As tensions in town rise along with Tuttle Creek Lake’s elevation, French advised wariness of rumors of evacuation circling social media and other unverified sources.

“If an evacuation is ordered, local officials will notify you,” French said.

While officials said they remain optimistic that evacuations may not be necessary, Collins said residents located near Wildcat Creek and the Big Blue River should be prepared for an evacuation. Many speakers at Tuesday’s media conference said being able to evacuate within a couple hours of notice is the standard residents should prepare for.

Collins advised people who live in flood-prone areas with large equipment to “get it out of there.”

“There’s no use waiting until the last minute,” he said.

Collins said he encourages residents to “keep an eye on local media, and stay aware of the ongoing risk.”

Vivienne Uccello, public information officer for the city of Manhattan, recommended gathering up items that are necessary to prove one’s identity and residence. She said she recommends packing up important documents, medications, clothing, pet supplies and any other items that would be necessary to be out of the house for an extended period of time.

“If a major flood event does happen, folks should be prepared to be out of their homes for several weeks,” Uccello said.

When asked how long the flood risk will affect Riley and Pottawatomie residents, McNulty said he thinks “we’re in this for the long haul.”

In the event of a necessary evacuation, Uccello said the American Red Cross will open shelters in the area.

Tetanus vaccinations will be provided to the public on Saturday from 10 a.m. to 2 p.m. at Northview Park.

Ongoing information related to the flood risk can be found at the City of Manhattan flood website or by calling the informational helpline at 785-587-4526 from 8 a.m. to 8 p.m. Monday through Friday. 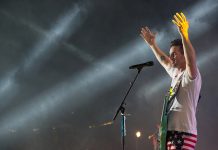