Manhattan has no shortage of pyrotechnics this week. Currently, Manhattan is home to 17 firework stands, each filled with mountains of fireworks ranging from smoke bombs to artillery shells in advance of Independence Day.

Some of those stands are for-profit, some are for school fundraisers and some are for charities for the betterment of the community — all have their reasons for selling fireworks during the holiday season.

Brandon Ratzloff and his mother Sandy Ratzloff started their family business, Celebration Fireworks, 12 years ago. Brandon became interested in fireworks when he took on the job of manning a firework stand for the first time after returning to Kansas from a Disney internship in Florida.

“I love fireworks, and the whole idea was near and dear to my heart, [so] I found an ad in a newspaper to run a local tent,” Brandon said. “After a couple of years of trying that I asked myself, ‘Why don’t we take this on?'”

Over time, Brandon and his mother expanded their business and now have multiple locations in and outside of Manhattan, but they started right in the Little Apple.

This year, the Celebration Fireworks stand on the corner of Kimball Avenues and Tuttle Creek Boulevard is run by a local family. Joe Heckman said it began as a fundraiser four years ago, but now it is a good way for his kids to make some pocket change.

His family started working firework stands for fundraising in their church community, but since a friend of Heckman stopped working the Celebration Fireworks stand on the same corner, he took it over this year with the help from his children.

Heckman’s daughter, Christina Heckman, works the cash register while his other children would help out around the stand during the week of Fourth of July.

Another firework stand in Manhattan is the Bikers Against Child Abuse fundraiser stand on Third Street, where Manhattan’s Native Stone chapter use the pyro-filled holiday to fund their chapter activities year-round.

BACA chapter president Snuffy and chapter security Mikey P. have helped run the stand with the rest of the 33-member chapter for the last four years.

Snuffy and Mikey P. talked about the mission behind BACA and how it helps the local community by providing a safe space for children experiencing violence and or abuse.

Snuffy said was previously enlisted to the military, and once he returned to civilian life, he wanted an organization to ride with. He then saw a picture of one of his friends in a leather vest, or a “cut,” and asked him what organization he was involved in. His friend then told him about BACA.

The fireworks stand operated by the Native Stone chapter generates funds for chapter operations and the funds necessary for the children involved in the Manhattan chapter.

“We have a lot of returning customers and a lot of folks that are here to support the cause, and they’re coming back [because] they know what 100 percent of their money goes to,” Snuffy said. “It all goes back to the kids.”

No matter if buying fireworks is for fun or for a cause, there is no shortage of them in Manhattan this year. Fireworks began selling in Manhattan on Monday and will conclude at midnight on the Fourth of July, but elsewhere Riley County, sales are permitted to continue until midnight next Tuesday. 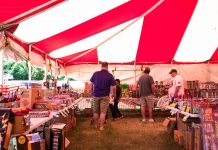 What to do on Independence Day: Students share Fourth of July plans 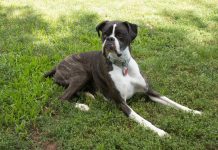 De-stress your pet: Tips for keeping animals calm during fireworks 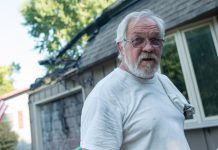