Home Featured Home After Tuttle Creek’s major rise in May, flooding still a concern through...

Heavy spring rains affected the Great Plains in various ways this year, but in Riley County, the most prominent effect was the flooding concerns prompted by the Tuttle Creek Reservoir reaching near-capacity at the cusp of May and June. United States Army Corps of Engineers management at the dam coordinated releases through the outflow tubes, bringing the reservoir level down from its 1,136-foot capacity in the early days of June without downstream flooding.

However, over a month later, Manhattan’s flood risk is not a thing of the past.

“[Flooding] has been a danger throughout the Midwest this entire season and will continue to be a threat probably until the end of 2019,” said Vivienne Uccello, public information officer for the city of Manhattan.

Out at Observation Point at Tuttle Creek Lake — pedestrians are walking along the closed-off highway along the dam. I can faintly hear machinery running (maybe the outflow tubes?) pic.twitter.com/GNNsyUvmPI

“Since this has been a really wet season and it’s predicted to continue to have heavy rainfall throughout the year,” Uccello continued, “the National Weather Service gave us kind of a 60 percent chance all throughout the Midwest that flooding might occur this year.”

Uccello said the Corps of Engineers is in charge of monitoring waterways to prevent flooding situations throughout the country, and the city is monitoring the situation at Tuttle Creek as well.

As of Monday, Tuttle Creek is just under 1,128 feet. Pat Collins, Riley County Emergency Management director, said people can get more comfortable when the lake level dips below 1,128 feet, but flooding could still be possible down the road.

“It looks like there’s some storms down in the gulf right now that are popping up that could bring us heavy rains,” Collins said. “The nice part about it is the lake outflow is consistently higher than the inflow.”

Monday’s outflow from Tuttle Creek was recorded at 20,000 cubic feet per second. While the situation at Tuttle Creek is improving, Collins said wet weather still leaves Manhattan in favorable flooding conditions for Wildcat Creek, the Kansas River and Campus Creek.

“One of our biggest concerns is that area where Campus Creek starts up around the football stadium and drains clear down,” Collins said. “All that water is going to come down, and we’ve got to pump that out. So a three- or four-inch rain inside the city limits of Manhattan could cause severe flooding down in that area if the gates are shut.”

Until the threat of flooding is imminent, Uccello said the best thing city officials and residents can do is keep an eye on the conditions.

“Right now, our advice is if you are in a low-lying area … if your home is near a body of water, near a creek, or in a low-lying area ⁠— so if you’re not on a hill, flood insurance is probably a good thing for you to consider either as a renter or as a homeowner,” Uccello said. “That’s really the only way to give you some recovery options if a flood were to occur.”

When flooding does become a threat, the city’s Emergency Operations Center will open, and Uccello and Collins both said awareness and communication with the public is an important next step.

“I think the key is making sure that people are aware,” Collins said. He cited the high water levels at Tuttle Creek several weeks ago as a good exercise in getting communication out to people about the flood risk.

Also ready to step in when flooding happens are the members of the Manhattan Long Term Recovery Committee, which was established following the 2018 Labor Day flooding, said Deb Abner, disaster relief and recovery manager for Catholic Charities of Northern Kansas.

“Even before a disaster strikes, service agencies throughout Manhattan are meeting with each other to prepare for disaster events,” Abner said.

Various agencies are part of the committee, with religious organizations, secular non-profits and private businesses all connected to provide disaster assistance.

“When a disaster occurs, disaster relief agencies are on the ground, responding to protect life and property,” Abner said. “At the same time members of the Manhattan Long Term Recovery Committee, the Red Cross and others open a publicized location called a multi-agency resource center. This site is an efficient way to deliver a “one-stop disaster shop” by bringing together multiple service providers at a single location to provide on-site financial and emotional care assistance.”

Manhattan residents can stay up-to-date on the latest flood precautions and warnings through the city’s Emergency Management department’s website. 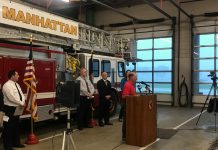