One of the most anticipated films of the summer, Disney’s recent remake of “The Lion King” has both children and adults rushing to their local movie theaters to see it.

If you are a fan of the original film, like most of us that grew up in the ’90s and early ’00s are, then you probably marked your calendar to see the remake of such a classic and nostalgic movie.

The film differs from the original cartoon animation in many aspects, but the biggest change is that the remake is photorealistic and computer-animated. The new “Lion King” is made to look as if it were filmed in Africa with an entire cast of animal actors and actresses.

Unfortunately, the new technology that allows the film to seem more realistic makes the film feel as if it has lost its magic and part of its relatability.

The movie is no longer a colorful, fantastic story about a young cub that grows into a leader. It feels closer to a documentary about lions in an African community, where the keen visuals make suspension of disbelief difficult.

This realistic change somehow made the whole movie feel unrealistic and cheesy.

For animal lovers, of course, the baby cubs and full-grown lions are majestic and beautiful. However, it is odd to see the lions and accompanying animals speaking to one another and communicating in such an unnatural way.

The casting for the film was spot on for how successful the original movie was and hoping for the same level of success for the remake. But such a notable cast added another hurdle to following the storyline.

When the voice of Beyoncé came from the character Nala, all I could think about was that it was Beyoncé’s angelic voice, which ended up distracting me from the storyline itself.

Donald Glover as Simba was exciting to see, but my mind wandered to his persona as a rapper and musician; Childish Gambino playing Simba felt like a contradiction.

The most effective celebrity voice actor was without a doubt Seth Rogan. Rogen as Pumbaa was shockingly true to his identity as an actor; now I think of Seth Rogen and Pumbaa as a single entity.

Overall, the film is still worth seeing and undoubtedly entertaining for audiences of all ages. The music was fantastic and the storyline itself was not changed much at all. In comparison, the remake is not as good as the original, but as a big fan of the original I can’t help but be a little biased.

Mykia Carrell is a senior in mass communications. The views and opinions expressed in this review are those of the author and do not necessarily reflect the official policy or position of the Collegian. Please send comments to opinion@kstatecollegian.com. 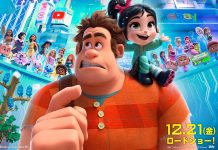 REVIEW: ‘Ralph Breaks the Internet’ an average movie, but enjoyable for all