You might have noticed a colorful, mini trailer home with a white picket fence driving down Tuttle Creek Boulevard. That would be Joanna Jane Sweet Treats, a local, family-owned business usually parked on N. 3rd Street.

Originally from Marysville, Kansas, Nick and Alicia Pecenka have lived in Manhattan for nearly 20 years and have long dreamed of opening their own dessert place.

Named for the middle names of the owners’ daughters, the unique little place is a one-stop shop for whatever dessert treat your heart desires.

“It all started out as ‘Well, what do we like, what types of food and what types of dessert?’ and it was kind of a snowball effect, kind of throwing ideas off of each other,” Nick said.

Besides running Joanna Jane during the summer, the Pecenkas both have full time jobs. Alicia is a teacher at Anthony Middle School, and Nick is the building manager for the College of Business Administration at K-State.

“We thought we had a pretty good idea of how many people would show up,” Nick said. “This summer, it really really took off.”

The two said that it was scary investing a lot of time and money.

The menu features a variety of snow cone combinations drawn from local inspiration, from the green apple and cherry flavored “Little Apple” to the peach and orange “Konza Sunset.”

“I wanted the menu to be things around town … or you know unique to Kansas or Manhattan,” Alicia said.

Alicia said the most rewarding part of starting this business has been the sense of community that’s come along with it.

“You know we’ve lived here forever, but there’s so many people that we’ve met,” Alicia said. “We see them in the off season and we can have conversations because we saw them all summer.”

Gillian Awbrey is a former student of Alicia’s that started working at Joanna Jane this summer. Awbrey said she enjoyed meeting people through the job.

“I really like my coworkers, they’re all super fun to be around, and just meeting new customers as they come is really fun,” said Awbrey.

Joanna Jane Sweet Treats will remain open through the end of August for those looking to enjoy one last taste of summer, but with limited hours from Thursdays to Saturdays due to the staffs’ school schedule and other commitments.

Sunday, Aug. 25 from 5:30 to 8:00 p.m., Joanna Jane will be hosting a fundraiser for the Twisters Softball Organization, with 25 percent of proceeds going to the group for uniforms and softball tournament entry.

Alicia said they plan to reopen next year around spring break. 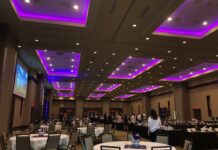 Travel and dining auction rings in 25th year this April