Sodoma dribbled the ball close to the end line before crossing the ball into the six-yard box. Furio was able to connect with the ball and tap it in from 3-yards out past K-State sophomore keeper Rachel Harris.

It did not take long before the Wildcats responded. K-States first and only goal of the night came 10 minutes after Arkansas’.

The junior from Lincoln, Nebraska had not scored since Aug.18, 2018. Davis is now up to four career goals.

At the half, the Red Wolves only recorded three shots while the Wildcats recorded 10 shots.

In the second half, the Wildcats kept pushing to find the back of the net, outshooting Arkansas 17-2. Although the Wildcats were persistent, they did not have any luck getting past sophomore goalkeeper Megan McClure.

Entz said she couldn’t figure out what was holding the Wildcats back from scoring.

Although Arkansas State only put up two shots in the second half, they were able to find the net in 60th minute of the game.

The goal came from a set play the Red Wolves had from midfield followed by a misplayed header. The ball landed in open space and Arkansas State freshman midfielder Sophia Restrepo was able to shoot the ball into the lower-left corner.

Restrepo’s goal was enough to deny the Wildcats a victory, extending K-State’s home losing streak to eight games. The Wildcats are now 0-11-1 in their last 12 games.

“It’s a tough one to swallow,” head coach Mike Dibbini told K-State Sports. “I felt like obviously we were the better team. The lack of execution, I mean we had chances. It’s one of those tough matches to be involved in. You do everything right, but the goal wasn’t being nice to us today. The ball was hitting the post, the frame.”

The Wildcats will look to end their losing streak Sunday afternoon as they will host South Dakota State at 1 p.m. in Buser Family park. 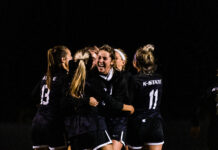