After dropping the first game of the Wolfpack Invitational, the Kansas State volleyball team split the second day of action in North Carolina.

In the first match on Saturday, the Wildcats played Austin Peay and won in four sets.

Sophomore opposite hitter Gloria Muturi led the match with 14 kills followed by redshirt sophomore outside hitter Brynn Carlson who had 13. K-State outmatched Austin Peay 57-46 in kills.

The Wildcats hit over 30 percent in the three-set victories. The first two sets were split between the two teams. K-State took the first set 25-17 and Austin Peay won the second set 25-19.

The Wildcats took a 20-12 lead in the first set against the Governors, and K-State went on to take the set. Muturi had three kills on four attacks.

The third set was all Wildcats with a 25-10 victory. K-State never trailed in the set and hit 51 percent. Peyton Williams led with 4 kills while the team overall had 14.

The Governors hit 33 percent in the second set to go on a 10-2 run and take a four-point lead to tie the match.

Austin Peay led by six points in the fourth and final set and took their first lead of the set. K-State closed out the set by scoring five of the last seven points to close out the win.

The Wildcats are now 1-0 all-time against the Governors.

The second match of the day was against Maryland where the Wildcats fell 3-2 in five sets.

Carlson and Muturi collected 14 kills in the match while hitting .289 and .263, respectively. The Wildcats won the first set 25-20.

After being down 2-1, the Wildcats took the fourth set 25-15 with six kills from Carlson.

The match was decided by a fifth set that saw Maryland jump out to an 8-0 lead. K-State only managed to score five points before letting Maryland win the set 15-5 to seal the match victory.

The Wildcats are now 1-2 against Maryland. K-State returns to Manhattan for their home season opener on Sept. 5 against Clemson. The game will be played in Bramlage Coliseum and can be seen on ESPN+ at 5 p.m. 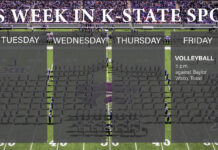