In the delivery of the 190th Landon Lecture, secretary of state and former U.S. representative for Kansas Mike Pompeo discussed the United State’s tradition of unalienable rights and how the State Department integrates those values into its service within the United States and abroad.

Pompeo’s speech in McCain Auditorium at Kansas State University today at 10:30 a.m. was titled “In Defense of the American Rights Tradition.”

When Pompeo took the stage in McCain Auditorium, he addressed the crowd: “Good morning, everyone. How y’all doing?”

The bulk of Pompeo’s speech focused on unalienable rights as defined by the United States’ defining documents and founding fathers. He quoted the Declaration of Independence: “We hold these truths to be self-evident, that all men are created equal, that they are endowed by their Creator with certain unalienable rights, that among these are Life, Liberty and the pursuit of Happiness.”

“In other words, these are rights that were endowed upon us by our creator,” Pompeo said. “They’re part of our nation, and they’re part of who we are as Americans, as human beings. They are independent of anything our government does, and the purpose of government, indeed, is to protect those unalienable rights.”

As an example, Pompeo spoke on Kansas’ stance in the wake of the Civil War. Its conflict over slavery was, in essence, “a fight over unalienable rights.”

He cited Kansas abolitionist editors George Washington Brown and John Speer alongside a quotation from Abraham Lincoln that affirmed the country’s tradition of protecting and fighting for unalienable rights.

“That fight has continued,” Pompeo said. “We are an imperfect nation, to be sure. But we’re lucky — we have unalienable rights as our foundation, our North star.”

Those rights extend outside of the U.S., Pompeo said, as seen in the State Department’s work extending back to the United Nation’s 1948 adoption of the Universal Declaration of Human Rights.

“This was the first time ever that America led nations to set a standard for how governments should treat their people,” Pompeo said. “We even fought to protect unalienable rights of the people in nations we had just defeated. This wasn’t American imperialism, but rather American mercy, or grace.”

Although victories concerning human rights have occurred globally, there are still human rights violations worldwide that the State Department attempts to address.

“We owe it to all Americans to uphold this noble tradition of American leadership to secure rights, here at home and abroad,” Pompeo said.

Pompeo said American students lack education on U.S. unalienable rights, and media attempts to “rewrite our history as an unrelenting tale of racism and misogyny, not as a bold and imperfect nation.”

Pompeo’s comments and affirmations to upholding unalienable rights did not escape challenge; in the Q&A session following his speech, K-State faculty members, students and community members questioned Pompeo on a variety of issues, including the suppression of scientists’ work within the State Department, abortion and the internment of Uyghur Muslims in China.

A question posed by Cora Farley, second year student in the College of Veterinary Medicine, addressed immigration: “My question relates to how you talk so strongly about the unalienable rights that America wants to uphold not only here in the states but also throughout the entire world, and yet the Trump administration very strongly opposes people coming here in search of those rights and being able to pursue happiness in countries where they may safe.”

Pompeo said the opposition to immigration is “fundamentally not true,” stating that the U.S. has an obligation to protect American sovereignty and conduct a generous, lawful immigration policy.

Q&A: President Myers discusses how he got to K-State, time in military

“I’ve been to El Salvador, I’ve been to Mexico several times,” Pompeo responded. “These people who are coming across our southern border, they’re putting their lives at risk, the lives of their children. We need a system that welcomes people to come to our country in a way that is lawful and respectful of their human dignity, and it’s what President Trump is aiming to achieve.”

Olivia Rogers, senior in political science and Collegian community co-editor, asked Pompeo how young people can live out the values he spoke on.

Pompeo listed three actions: Know the history of the U.S. and the histories and philosophies that predate it, “work your tail off” and define success on your own terms. He cited his own foreign service officers who define success as taking on a life of public service.

“Everyone here will choose a different path and define success in a different way,” Pompeo said.

At the end of his speech, Pompeo said Americans have the responsibility to protect and promote the tradition of unalienable rights.

“We Americans are the heirs of immortal principles,” Pompeo said.

The next Landon Lecture will take place later this month on Sept. 27. Fortune CEO Alan Murray will give the 191st lecture in the longstanding series. 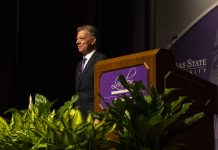 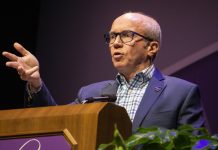 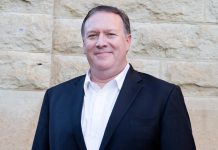 Alan Murray talks about the future of facts in 191st Landon...