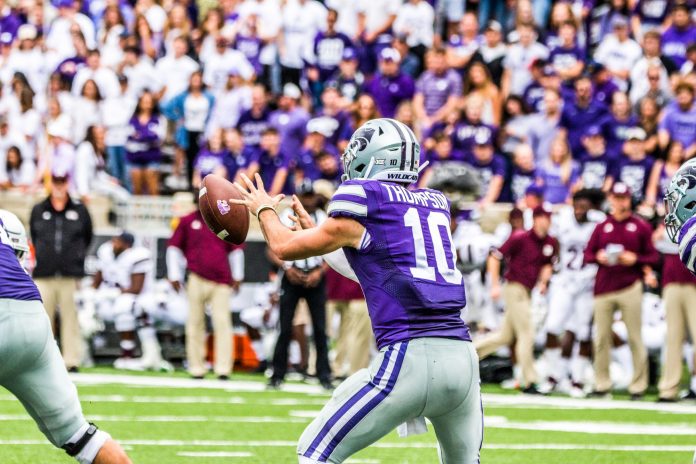 The Jayhawks struggled in the 12-7 loss to Coastal Carolina. Kansas gave the Chanticleers the program’s first win over a Power 5 opponent.

Senior quarterback Carter Stanley is still the starter after a near dismal game two going 13-19 with 107 yards and two interceptions. Sophomore running back Pooka Williams Jr. rushed for 99 yards in his return for the Jayhawks.

The Kansas defense had nine tackles for losses including three sacks in the loss.

The Mountaineers struggled against Missouri on Saturday in a 38-7 loss. Junior quarterback Austin Kendall went 15-25 for 137 yards with one touchdown and two interceptions.

The Mountaineers will try to bounce back at home against North Carolina State on Saturday at 11 a.m. on FS1.

The Horned Frogs are coming off a bye in week two after a win in week one. TCU will be rested and ready to play Saturday. The Horned Frogs could use a two-quarterback system in week three with freshman Max Duggan and senior Alex Delton.

The Horned Frogs will play Purdue on Saturday at 6:30 p.m. on the BTN.

The Red Raiders are looking for a test after a 38-3 week two matchup against the University of Texas at El Paso on Saturday. Sophomore quarterback Alan Bowman threw for 260 yards and three touchdowns. Junior wide receiver TJ Vasher had six receptions for 78 yards and two touchdowns.

Texas Tech will have a Power 5 test on the road against Arizona at 9:30 p.m. on ESPN.

K-State dominated in week two in a 52-0 shutout against Bowling Green.

The K-State defense kept the Falcons out of the endzone and recorded six tackles for losses including one sack.

The Wildcats will have its first true Power 5 test on the road against Mississippi State on Saturday at 11 a.m. on ESPN.

Baylor will have the week off before facing Rice next Saturday.

The Cowboys have dominated the first two games including a 56-14 win over McNeese thanks to Chuba Hubbard who had collected 265 yards and five touchdowns through two weeks.

Freshman quarterback Spencer Sanders threw for 250 yards and three touchdowns and led the team in rushing with 51 yards in Saturday’s win.

The Cowboys will play Tulsa on Saturday at 2:30 p.m. on ESPN2. The Cowboys are 14 point favorites.

Iowa State had time off to recover after struggling against Northern Iowa in a 29-26 triple-overtime thriller in week one. It is easy to see that the Cyclones lost a lot of talent to the NFL. Sophomore quarterback Brock Purdy went 30-41 for 278 yards and two touchdowns in week one.

The Cyclones will be ready to face in-state rival Iowa on Saturday at 3 p.m. on FS1.

Texas lost a tough 45-38 matchup between LSU last Saturday in Austin. The Longhorns will have to regroup. To have a chance at the playoffs, they will have to play perfect football throughout the year. Junior quarterback Sam Ehlinger threw for 401 yards and four touchdowns. It was a difficult loss for Texas, but the Longhorns are going to be a tough team to face in the Big 12.

Texas will face Rice on Saturday at 7 p.m. on the CBS Sports Network.

Last week’s matchup was not even close between the Sooners and South Dakota in a 70-14 rout. Oklahoma looks like the team to beat in the Big 12 through week two. Oklahoma put up 733 total yards in the blowout.

The Sooners will play Power 5 opponent UCLA on Saturday at 7 p.m. on FOX.

No. 3 Virginia Tech too much for Wildcat baseball

‘I have felt pretty safe all along:’ Volleyball team prepares for...