Students gathered in the K-State Student Union Ballroom Monday night to experience Wildcat Dialogues — a night of discussion to create a pathway of intercultural interaction.

The event’s planning committee consisted of 30 individuals in a variety of departments and services throughout Kansas State. Seven students spoke at the event followed by breakout sessions and an ice cream social.

“Our current national climate delivers a need for dialogue,” said Jansen Penny, senior in industrial engineering and student body president. “We are here to share dialogue that delivers competence and confidence.”

Most students attending were freshman attending for a class requirement or learning communities.

Before the event, many students did not know what to expect.

Despite student outcry, there likely won't be a fall break added to university calendar

“I haven’t really heard anything about this,” Jarrod Springston, freshman in accounting, said.

However, he said he felt optimistic about the event due to its relationship to his leadership class.

“Leadership is more than just taking control of a situation; it deals with emotions and values,” Springston said.

The speakers shared personal stories on immigration, poverty, race, gender identity, sensory disadvantages, being from another country or coming from a broken household.

Ellie Seeler, freshman in elementary education, spoke even though she’s only been at K-State for four weeks. Seeler experienced hearing loss her entire life, but sees how it built her strengths.

“I am very good at lip reading,” Seeler said.

She credits helping out at the Special Olympics as her reasoning to pursue a major with an emphasis on special education.

“What is normal for me may not be normal for you, and that’s okay,” Seeler said.

Her words were similar to many speakers that night, emphasizing how people are different, but come together to make one K-State family.

Shania Cook, sophomore in sociology and criminology, related to first-year students by sharing her own experience.

“College is like looking both ways before you cross the road and then getting hit by a plane,” she said.

After the speeches, students had a moment to share their thoughts in breakout sessions of six to ten people led by facilitators. While many facilitators were faculty, some students had the opportunity to lead the small group discussions.

Lily Colburn, sophomore in political science, was one the facilitators.

“I saw what the facilitators did my first year, and I wanted to do the same,” she said.

Colburn explained how each group had a deck of 52 cards with various questions to help students start conversations on gender identity and communicating with people from a different linguistic background.

“I’ve heard a lot about [Deferred Action for Childhood Arrivals] students, but I wasn’t really expecting for any of them to be here [at K-State],” Elizabeth Gregory, freshman in open option, said. 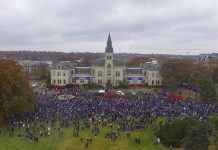