At approximately 9:15 a.m., parts of the north side of campus lost power. According to K-State Alerts, parts of Denison Avenue between Kimball Avenue and Jardine Drive were also without power.

An initial alert sent out after 9:30 a.m. indicated the outage was caused by a construction accident.

Shortly after, a message from K-State Alerts went out:

“K-State Police, Manhattan Fire Department and Westar Energy are on scene. We will send an update when the road is open.” 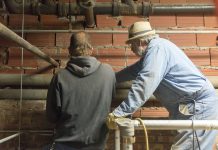