On Friday, President Richard Myers started off his annual State of the University address by saying this one would be different than others he delivered in the past. This one, he said, would be in the context of the Kansas State 2025 vision.

In Fiscal Year 2018, he said, the university recorded the highest research expenditures to date, clocking in at a total of $218.3 million. This marks a 36 percent increase since Fiscal Year 2010, Myers said.

Additionally, Fiscal Year 2019 was another landmark year for K-State research. In total, the university raked in $174 million in research award dollars spread across 1,553 awards.

“I think we have an excellent administrative support for research, both centrally and in decentralized fashion,” Myers said. “In this case, I think it’s true that success breeds success.”

Since 2012, 79 new endowed faculty funds were added. Also, he said, there was a 16.24 percent increase in average salary for tenured or tenure track faculty.

Myers also addressed new leadership within the university, mentioning specifically the addition of Thomas Lane as the new vice president for student life and dean of students. Moving forward, he said, more positions are soon to be announced, such as the vice provost for student success, vice provost for enrollment management and associate provost for institutional research.

Myers also mentioned K-State’s recognition as a five star LGBTQ friendly college by the Campus Pride Index, and that the Black Student Union’s repeated recognition as Best in the Big 12.

“Clearly, we have a long way to go on our journey, but these are indicators that at least we’re on the right path,” Myers said.

In terms of private giving, Fiscal Year 2019 marked another new record at $212 million. About 24 percent of that, Myers said, was earmarked for athletics, totalling about $51.8 million. The university also reached record endowment in $613.4 million.

Since 2017, the university added 375 scholarship funds.

“I think people got their heads on straight,” Myers said. “We know what we have to do.”

Going forward, Myers said the university will revamp its scholarship and tuition strategies, particularly those out of state.

He instructed the audience to check the Monday K-State Today for a letter he co-wrote with Provost Charles Taber that provides a roadmap for the new K-State 2025 plan.

Jansen Penny, student body president and senior in industrial engineering, said he is looking forward to future conversations about the changes to the K-State 2025 initiative.

“One large part of that, which I think is really cool, is going to be adjusting what our mission and vision is at Kansas State University,” Penny said. “We’re going to need a lot of feedback from students, faculty, staff and the larger community on what adjustments we need to make so that our mission really aligns with what our goals are here at K-State.” 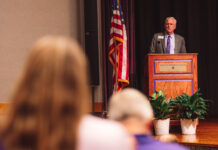