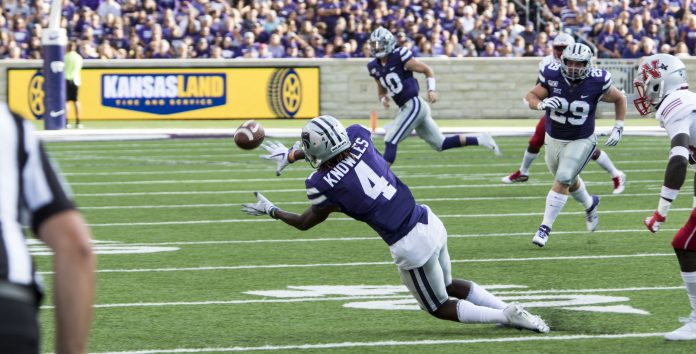 The Kansas State Wildcats are coming off the first loss of the season in the Big 12 opener against Oklahoma State last weekend ahead of their first home game in three weeks against Baylor.

The Wildcats will again be without redshirt freshman wide receiver Malik Knowles, who missed the conference opener with a foot injury. Knowles has nine receptions for 137 yards and two touchdowns in only three games this year.

“I do not have more clarity, it truly will be a week-to-week deal, and we are hoping he can do some things this week in practice,” Klieman said after the 13-26 loss to Oklahoma State.

Knowles’s absence showed against the Cowboys: the offense had only one rushing touchdown for 126 yards total.

Defensively, Baylor is second in the conference in rushing defense, allowing an average of 102.5 yards per game. The rush is a huge part of the game that K-State relies on and had success with against Baylor last year.

“I think that the unique thing for me is I think they have transformed their defense from the last time K-State played them,” Klieman said

In the last matchup against Baylor came on the road, and K-State rushed for 319 yards including a monster day from former running back Alex Barnes, who had 22 touches for 250 yards and three touchdowns. The Wildcats fell short 37-34 on a late field goal.

“They are much more three down, and whenever we saw in last year’s game we don’t even want to use because it’s so different from last year to this year,” Klieman said.

“They are a really good football team, watching them on film the past two days,” Thompson said. “They fly to the football, play hard. They are really physical. They get their hands on you, and they have a lot of experience.”

Both Thompson and Baylor’s junior quarterback Charlie Brewer enter the matchup without throwing an interception.

Junior defensive back A.J. Parker is tied for second in interceptions with two in four games and will be looking to hand Brewer his first interception of the season, but the defense has to bear down for a similar style of offense.

New helmets and white pants were revealed through social media on Monday. It is the first uniform modification since the white camouflage helmets in 2016.

Uniform modifications bring some excitement but the players still need time to get used to the helmet.

“We needed to unveil it yesterday just so the guys, Tuesday, Wednesday and Thursday have a chance to wear the helmet,” Klieman said. “That’s the biggest thing you know, you can’t unveil it on a Friday. The kids would freak out if they have a put a helmet on they haven’t worn for the whole week.”

K-State will open a three-game homestand against Baylor on Saturday at 2:30 on ESPN2.