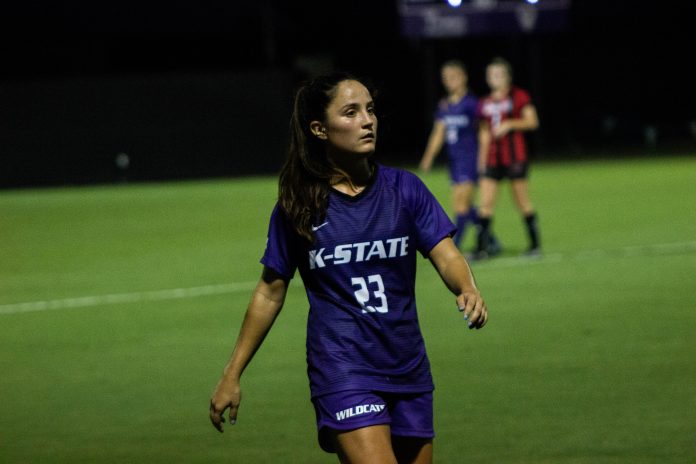 With three seasons and the nine games under her belt, senior midfielder Laramie Hall enters the last stretch of her collegiate soccer career with nearly 5,000 minutes of on-field action.

Hall is one of Kansas State soccer’s original recruits, but her time as a Wildcat is nearing its end.

“It’s so sad, like, you could ask any of the girls I literally cry every week,” Hall said. “I’m just very sentimental, and like nostalgic, because I can’t believe where we started, and I can’t believe where we are now. And just the bonds that are on and off the field. Everyone cares for each other, and it’s really awesome. So, it’s really sad, but it’s exciting at the same time.”

Hall’s name dots the program’s record books. She is second in program history with seven career assists, second in goals with six total and tied for second in goals in a single season, scoring three in 2016 and three so far this season.

Hall said that as far as her student athlete career goes she would “do it the same way 1,000 times over.”

While Hall has had a successful career on the field she said she is just as grateful for her experiences off the field.

“Just from obviously getting to play here and getting minutes and then just everything that K-State has done for me in terms of developing leadership and my character on and off the field — I think it’s a tremendous success,” Hall said.

“She’s helping a lot of our younger players understand what it takes to compete day in and day out, because of her leadership and grit,” Dibbini said.

After coaching Hall for the last four years, Dibbini said Hall took a chance on the built-from-scratch program.

“She came in with numerous opportunities and she chose K-State, and I’m very thankful and appreciative that she did,” Dibbini said. “And I love building that relationship with her over the last four years and see her grow and mature and put a stamp on this program.”

But what comes next for Hall? She said she doesn’t know for certain.

“I honestly have no clue,” Hall said. “I’m bopping around like six different ideas. I’ve applied to grad school. I’m not sure if that’s exactly what I want to do, but I’ve applied and so obviously I don’t know it could be on the field. It could be off the field.”

Hall and the rest of the Wildcats play Oklahoma this Thursday in Norman, Oklahoma, at 7 p.m.