Laurie Johnson, professor of political science, presented her lecture “Climate Change and Political Ideologies” in Ackert Hall on Tuesday as part of the Natural Resources and Environmental Sciences Seminar Series.

Johnson began the lecture by acknowledging the complex relationship between science, facts and politics.

“One thing that’s important for people to know … if they go into a field such as many of you are in, is the political dimensions of these issues,” Johnson said. “My goal today is to kind of give you a little bit of the lay of the land, ideologically speaking.”

Johnson explained some of the history behind the Climate Strike movement, classical liberalism, classical conservatism, anarchism and communism in relation to environmental issues.

“In the climate issues you tend to talk about reasserting individual rights against the corporate power,” Johnson said. “The idea in classical liberalism is that capitalism generally works. People involved in climate strike protests tend to say, ‘We need government to regulate better, to do a better job of sort of balancing the interests of business with all of our interests as people to help the environment.’ We are talking about political ideas and ideologies that previously were sort of off the table, especially in the United States. We’re beginning to see ideologies that truly question and reject liberal values.”

The mildest option, Johnson said, is classical conservatism, which is notably different than the type of pro-capitalist conservatism people commonly associate with former president Ronald Reagan.

“Some of the assumptions of this way of thinking are that society — and not the individual — is primary, that community is of the primary importance, and we have to be careful to keep that social fabric from unravelling,” Johnson said.

Classical conservatism says too much growth, too much change, too much displacement and the exploitation of the environment causes disruption in human communities that makes it harder for us to live meaningful lives, Johnson said.

Anarchism, though it shares classical conservatism’s emphasis on localism, is the belief that the government is the cause of many problems and that people left to their own devices cooperate more easily, Johnson said.

Johnson elaborated further along the spectrum, explaining that communism, though not the totalitarian kind, is being openly discussed by some thinkers.

“There are people who, despite that legacy, are beginning to talk about, ‘Perhaps it’s time to think again about whether we need to change the system very drastically,’” Johnson said.

“These ideologies are coming into play more and more, they’re more extreme, they’re more challenging to the system,” Johnson said. “They aren’t necessarily bad, or at least not all of them. They all have some ideas that might be worth learning from. At the very least, you need to know they exist and that if things do get worse, those more extreme ideologies are the ones that gain traction and that’s just the facts.”

“Climate change is a big thing that we talk about both in NRES and in biological systems engineering,” Long said. “We don’t talk about the politics of it a lot. We normally talk more about the science of it. So I think this is really good as far as how we convey that scientific information effectively.”

The Natural Resources and Environmental Sciences secondary major is a program designed to prepare students to apply their scientific knowledge to the use, sustainability and quality of natural and energy resources.

The next NRES seminar will be “Tallgrass Prairie Responses to Forecast Climate Change,” led by Jesse Nippert, professor of biology, on Oct. 10 at 11:30 a.m. in Ackert 231. 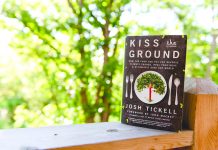 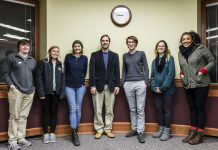