The Wildcats traveled to Stillwater, Oklahoma, to face Oklahoma State on Sunday afternoon. The Wildcats put on a stellar performance, but fell short in getting the win on the road.

“This was one of the best matches we have ever played, from a tactical and possession standpoint,” head coach Mike Dibbini told K-State Sports. “I thought we were the better team. We outplayed them for 86 of the 90 minutes, but this game is pretty cruel. We let down for four minutes and a team like that, which has been around the block, didn’t panic and scored the two goals they needed.”

At the half, the game favored the Wildcats as they had a 1-0 advantage on the Cowgirls.

K-State’s first goal came in the 25th minute. The play started with junior midfielder Brookelynn Entz on the left side, just outside of the 18-yard box. Entz connected a pass to the right of the box to redshirt freshman midfielder Bailey Nemechek who quickly passed the ball to senior forward Katie Cramer. Cramer did not hesitate and quickly took a shot on goal. The ball took a minor deflection from an Oklahoma State player but that was not enough to keep the ball from finding the back of the net.

“The whole team was involved with the goal,” Cramer said to K-State Sports. “We were switching balls really well and were keeping it. We were swinging it from side to side, and it made the defense shift to the right side. Bailey Nemechek has great awareness on the field and she found my feet on the backside, and I just finished it.

This was Cramer’s fourth goal of the season, marking a new career-high. She is now tied for the program record with eight goals.

K-State falls to Oklahoma 3-2 in overtime

The Cowgirls did not respond to Kansas State’s efforts until a goal by sophomore midfielder Grace Yochum in the opening minutes of the second half.

Yochum received a crossed ball from the left side of the 18-yard box from junior defender Hannah Webb and sent it to the back of the net.

Oklahoma State took the lead two minutes later. Webb assisted in the winning goal by junior forward Gabriella Coleman who shook off a defender and fired off a shot with her left foot.

The Wildcats will face Iowa State in their next home match at Buser Family Park. The game is on Friday, Oct. 11 at 7 p.m. 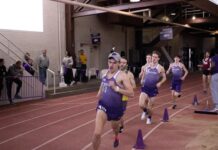