He knows what it’s like, he said, to be a Republican on a politically correct college campus.

Kobach then moved to addressing the recent impeachment inquiry related to President Donald Trump’s alleged impropriety in conversations with the president of Ukraine. As a former constitutional law professor, Kobach said he used to teach the “actual text” of Constitution.

He said the Founding Fathers thought of the impeachment mechanism as a last resort, not something to be done in the middle of an election cycle.

“You don’t need impeachment if the people are already evaluating and looking at the choices,” Kobach said. “We are in the middle of a presidential election, and so let the people decide who should be their next president.”

He went through the reasons for impeachment stated in the Constitution: treason, bribery or other high crimes or misdemeanors. He said nothing the president has done would constitute impeachment.

Additionally, Kobach said he’s taken on a position as general counsel for the “We Build the Wall” organization, a group working to build Trump’s promised border wall with privately funded donations. Private action, he said, is part of American history.

“Throughout American history, we as private citizens stepped forward and said, ‘Yeah, we’ll do that. We’re not going to wait for the government to do that,’” he said.

The last time he spoke to the College Republicans at Kansas State, Kobach said the hot issue on campus was concealed carry.

“You have demonstrated, as have campuses all across the country where campus carry is now being allowed, that this is not only something that students are quite capable of doing, protecting themselves and others, it also has made campuses safer,” Kobach said.

He said he believes Democrats are on a war path right now for two topics: impeachment and gun control. Kobach discussed a recent column he wrote for Breitbart news.

In the column, he describes why he doesn’t think efforts to tighten gun laws would stop mass shootings. In the post, he discusses recent events like those in Dayton, Ohio and El Paso, Texas.

“One is the lie that if we had had universal background checks, that we would have stopped those shootings,” Kobach said in his address. “The answer’s ‘No,’ both shooters, in Dayton and El Paso, passed a background check.”

During the Q&A session, he said one national issue he wants to address is the national debt, and that he thinks most politicians, including Republicans, are not focused on the debt as an issue.

“There’s so many problems with this debt, but the biggest one is that it’s immoral,” he said. “It’s immoral for my generation to spend money and then hand you a credit card and say it’s your job to pay for it.”

Kobach compared his senate race to the gubernatorial race he lost to Governor Laura Kelly in 2018, saying a common trend in Kansas is for the governor’s seat to switch between Democrat and Republican. In the contrary, he said, the Senate seat he’s got his sights set on has remained red for decades.

“One of the advantages of being in a recent race is you learn what works and what doesn’t work,” he said.

If the positions had been open at the same time, Kobach said he would’ve gone for the Senate seat instead of running for governor.

“If these two races, those races were happening in the same year, I would have jumped in the senate race in a heartbeat,” he said. “We didn’t know at that time that Senator Roberts would be retiring.”

At the end of his speech, Kobach referred back to his early connection with the audience.

“Thanks for fighting the good fight on college campuses,” he said. “I know the situation you are in, and oftentimes it can be tough defending truth and defending conservative principles.” 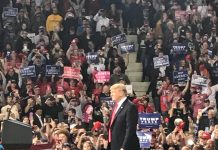