The Jayhawks are coming off a much-needed bye week after a rocky start to the season. Senior quarterback Carter Stanley has 1,175 passing yards on the season with 12 touchdowns and four interceptions. Junior wide receiver Andrew Parchment leads the Jayhawks with 422 receiving yards and four touchdowns.

The Jayhawks made a change at offensive coordinator during the bye week, so it will be interesting to see how the offense handles the adjustment this week on the road.

Kansas will play the Texas Longhorns at 6 p.m. on the Longhorn Network.

The Mountaineers may be descending from the mountaintop after a 3-3 start and a 38-14 loss at home on Saturday.

West Virginia will travel to Norman, Oklahoma, to face the undefeated Oklahoma Sooners on Saturday at 11 a.m. on FOX.

The Wildcats their second bye week in four weeks and are in need of a conference win.

The matchup between K-State and TCU puts the two leaders of the time of possession against each other. The Wildcats lead the conference, averaging 35:21. It will also feature former K-State Wildcat senior quarterback Alex Delton.

K-State will play TCU on Saturday at 1:30 p.m. on the Fox Sports Network.

Senior running back Darius Anderson is second in the conference in rushing, averaging 106.4 yards per game with six touchdowns on the year.

The TCU defense leads the conference in rushing defense, which K-State relies on heavily, limiting opponents to 101.2 yards per game.

TCU will go on the road as 3.5 point favorites against K-State.

The Red Raiders came extremely close to defeating Baylor on the road but fell short in a 33-30 double-overtime thriller last Saturday.

The Red Raider defense recorded three interceptions in the game, including one from senior defensive back Douglas Coleman III who leads the Big 12 with six.

Texas Tech will play Iowa State on Saturday at 11 a.m. on Fox Sports One.

The Cyclones turned the season around with a 38-14 win over West Virginia last Saturday. Sophomore quarterback Brock Purdy threw for 229 yards, one touchdown and one interception.

Freshman running back Breece Hall had a breakout day and rushed for 132 yards and three touchdowns.

Purdy is second in total offense with 1,995 yards on the year and first in passing average per game with 301.2 yards.

After an early struggle to put points on the board, the Cyclones outscored opponents by over 20 points in their last two games. Iowa State ranks fifth the country in red zone offense with a 96.4 scoring percentage.

The Cowboys are 4-2 after the bye week. Sophomore running back Chubba Hubbard has dominated defenses and leads the nation in rushing with 1,094 yards in six games. Hubbard leads the Big 12 in touchdowns with 13 on the season, all of which are rushing.

The Cowboys have a chance to be in contention for the Big 12 Championship but will have to win out to get there.

Oklahoma State will host Baylor on Saturday at 3 p.m. on FOX.

The Baylor defense leads the Big 12 with 23 sacks and has the second-best rushing defense through conference games. Opponents average 111.3 yards per game on the ground.

The Bears are technically bowl-eligible but have yet to play Oklahoma and Texas. The media preseason poll projected a sixth place finish for the Bears.

The Longhorns lost to rival Oklahoma 34-27 last Saturday. With two losses on the season both coming from top-10 opponents LSU and Oklahoma, the dream of reaching the College Football Playoff is all but over.

Texas still has a chance to get revenge on the Sooners in the Big 12 Championship if the team can manage to go unbeaten the rest of the year.

Ehlinger managed to rush for two touchdowns but rushed for -9 yards on 23 carries due to the fact that the Sooners got to him nine times.

Texas leads the conference in interceptions with 10 through six games and has a plus-seven turnover margin, which could become a factor as the season continues.

The Sooners outlasted Texas in the Red River Showdown, nearly sealing their place in the Big 12 Championship, but still remain as a candidate for the College Football Playoff.

Senior quarterback Jalen Hurts was tested for the first time all season and threw for 235 yards, three touchdowns and one interception. Hurts leads the conference in total offense with 2,388 total yards in six games.

Junior wide receiver CeeDee Lamb had a standout day with 171 yards and three touchdowns. Lamb is second in the conference in scoring with 11 touchdowns.

The Oklahoma defense dominated in the backfield, recording 15 tackles for losses, including nine sacks that tied a program record against Texas.

Oklahoma enters the matchup against West Virginia as 33.5 point favorites. 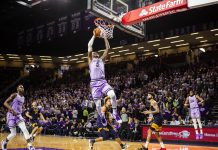 Myers responds to vandalism off campus