Spare a few tables and a long line of students, the K-State Student Union Courtyard didn’t look much different on Friday evening than it does any other day.

The line, a buzzing crowd of around fifty people, would freeze at each ear-piercing scream, but the silence never lasted long. The anticipation was too much for students attending the Union Program Council Haunted Union.

While most of UPC’s activities welcome students and community members alike, the Haunted Union was exclusive to Kansas State students. It was free for all students, and lasted from 8 p.m. to 11 p.m. on Friday.

Shaylin Ptacek, sophomore in accounting, tagged along with a friend.

“I’m a little nervous … haunted houses aren’t exactly my thing,” Ptacek said. “I’ve heard stories of people getting punched and of it being spooky in the basement.”

The quickly departing groups are no match for the crowd; nearly a hundred people were standing in line by 9:00 p.m.

Will Baldwin, freshman in open option, was one of these unlucky few near the back. He wasn’t deterred by the line — rather, he thought the big turnout was a sign it’d be good.

“This should be fun,” Baldwin said. “I’m excited. I’ve heard it’s good. If it is good, I’ll come back next year and bring random people that don’t know anything about it.”

Ptacek’s group is led down a long, dark hallway. From an empty doorway, a man with a chainsaw lunges out of the darkness. The girls shriek and laugh, elbowing each other out of the way as they attempt to stay close behind their guide.

Soon they reach a rickety old elevator, and the group cautiously boards. The doors open to reveal a dark second floor, and the riders hesitate. They expect a jump-scare is waiting for them. UPC staff anticipated the students’ hesitation — the scare comes from behind, forcing them into the hallway.

Blinding strobe lights illuminate the path. Around one corner, the source of the blood-curdling screams, a girl in rags awaits them. Around the next, an angry nun, stalking close behind.

The Haunted Union drew inspiration from pop culture, with “It: Chapter 2” references throughout the carnival-themed room. Clowns guard the balloon-filled walkway, asking, “Do you want to play?”

“My favorite room was the Pennywise room,” Baldwin said, after finishing his tour. “My friend Josh was freaking out behind me.”

The modern references were balanced by the classics. “The Shining” was another source of inspiration. Jump-scares were scattered throughout the path to keep tensions high among students. 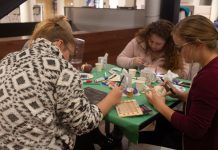 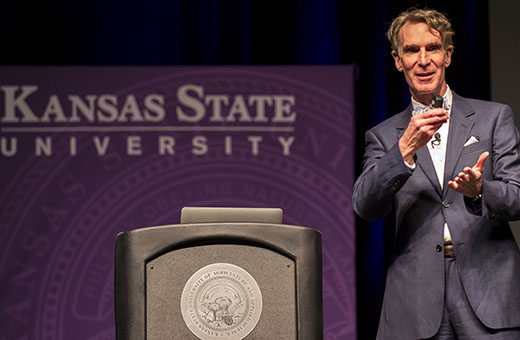