Home Featured Home As weather cools, pothole season is on the horizon

The expansion and contraction of groundwater beneath pavement creates a plethora of potholes that pepper the streets of Manhattan, damaging cars and irritating drivers.

Kara Wray, Aggieville Business Association marketing intern and senior in marketing, said she takes precautions to reduce potholes in Aggieville by using an application that enables users to say something when they see something.

Gary Bonawitz, local mechanic, said potholes can do a lot of damage to your car.

“If you hit a big enough one, it can bend a rim and ruin a tire and knock suspension out of alignment,” Bonawitz said.

He suggested trying not to hit the brakes, as it will cause more damage.

Bonawitz said drivers can avoid potholes by staying off their phones. Other tips include slowing down, leaving space between you and the car in front of you, being cautious around puddles, tightly holding onto your steering wheel and keeping your tires properly inflated.

Hitting a pothole may warrant a quick inspection of your car — look for a bulge on the sidewall of your tires, misalignment, abnormal vibrations or odd noises. A dashboard warning light could appear if something is wrong.

If you notice any of those you should take your car to a professional, such as a tire technician or a mechanic, to get it thoroughly checked. Ask for an inspection that checks alignment, tire steel belts, balancing weights, wheel rims, shocks, struts and other suspension components.

Robert Ott, Public Works director for the city of Manhattan, said there are hundreds of miles of city streets in Manhattan, and 21,765 potholes have been filled in so far this year.

“In terms of potholes as they’re reported, we patch them temporarily, hoping to get anywhere between three and six months out of them,” Ott said. “Every week crews work on potholes.”

The city crews use patch materials, or hot mixed asphalt, from local asphalt companies in the warmer months and cold patches in the colder months. Cold patches do not work as well, and crews often have to go back through the winter due to snow.

You can report potholes online or on the Report It! app. 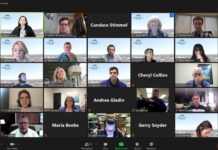 The city of Manhattan asks for community involvement, ideas to develop strategic plan

Public exhibition features artists from near and far