Home Community LETTER: We need to fix the broken relationship between cops and communities

On Oct. 12, 28-year-old Atatiana Jefferson was killed in her own home by a Fort Worth police officer. Jefferson was babysitting her 8-year-old nephew and had done nothing wrong.

A neighbor noticed Jefferson’s door was open after midnight and asked the police for a wellness check. When the officer walked around Jefferson’s home, she went to the window with her gun to see who was snooping around her backyard. With almost no warning and no announcement that he was a member of law enforcement, the police officer shot Jefferson dead.

On Oct. 1, former Dallas police officer Amber Guyger was convicted of murdering Botham Jean in his own apartment, a year prior and only 30 miles away from where Jefferson was killed. Like Jefferson, Jean had done nothing wrong. The police officer claims to have simply entered the wrong apartment, assuming that it was hers, and shot Jean because she thought he was an intruder.

The killings of individuals such as Jefferson and Jean have enraged and saddened many, including me. Some have sought to connect these killings to a broader narrative about systematic racism among police. Such stories receive a lot of attention, but I worry that they oversimplify the problem and only serve to further the divide between cops and communities.

Both Jefferson and Jean happened to have been black individuals killed by white cops, but I don’t think most cops are racist. I’m not even sure the specific cops who murdered Jefferson and Jean are racist. I do think that they were bad cops, who lacked the personal preparedness and mental wherewithal to deal with the situations they found themselves in.

I think most cops deal with dangerous and confusing situations that almost everyone would be unprepared for. I also think most cops are undertrained, underpaid, under-appreciated and overworked. Meanwhile, police departments are understaffed and overburdened, which forces them to accept officer candidates who may be less than stellar.

All of this contributes to a toxic environment ripe for misconduct. While this helps explain bad behavior, it doesn’t excuse it.

I think some cops are trigger happy and abusive, but even among the majority who aren’t, most don’t know the law well enough to enforce it effectively and holding them accountable is almost impossible. Some of them just make honest mistakes. But as we’ve seen, these mistakes can lead to death.

There is a vast power differential between cops and civilians. When a person experiences a violation of their rights at the hands of the police, there is little they can do in the moment. Cops don’t generally respond well to people questioning their methods or authority.

We are advised to “just do what you’re told” whenever we get pulled over or confronted by police. While this might be legitimate advice if you want to survive such an encounter, it is a sign that something is wrong with the way cops interact with the people they are supposed to protect and serve — although the Supreme Court tells us that they don’t actually have a duty to do so.

Crowdsourced: The keys the surviving college

So, civilians can’t confront armed officers, even when they know that their rights are being violated, for fear that they might be killed. Instead, they must hope to confront these cops in court.

Even putting the prohibitive costs associated with suing a police officer or department aside, such measures have questionable odds of success. Most cops — including “good cops” — will either cover their fellow officers or simply remain silent in the face of bad police behavior rather than side with an accusatory civilian.

Meanwhile, evidence can be tampered with and even cameras can be turned off or have their footage edited. Within this paradigm, civilians can feel overwhelmed and hopeless when faced with inappropriate police actions.

Clearly, we have a problem but simply labeling cops as bad in general does nothing to solve it. I’m not a police officer or an expert, but I have a few modest suggestions.

Police departments must do a better job of selecting good officers and training them to higher standards in knowledge of the law, protection of individual rights, de-escalation and non-violent conflict resolution. In turn, officers should feel comfortable calling out bad behavior, turning to internal affairs when necessary and speaking out when they see something wrong. All of this must be maintained with appropriate oversight.

Such changes aren’t easy. I’m suspicious of proposals that make the job of law enforcement “easier,” as they tend to end up violating our rights. In that vein, I acknowledge my proposals will take time and difficulty.

They may cost departments financially as well which only increases departments’ burdens. City and state governments must be willing to prioritize these reforms and find the money to fund them with the supervision necessary to ensure funds are spent appropriately. And quite frankly, politicians could ease some of the burdens on police and some of the resentment that people feel towards police if they got rid of some of the useless and ridiculous laws cops enforce.

In addition to departmental reforms, the relationship between cop and community needs to shift at the individual level. Officers should make themselves known to the communities they serve. This may be difficult in larger communities, but it can be done in a dozen small ways, ranging from something as simple as playing a game of basketball with a group of kids to hosting officer meet and greet days.

This type of behavior is sometimes typical of young officers, but the nature of a cop’s job often burns them out over time and leaves them embittered. Knowing the job of a cop is often stressful and thankless, perhaps people should be more compassionate and willing to welcome police into their communities rather than immediately treating them with distrust.

To be clear, police departments cannot change the relationship between cop and civilian on their own, but they must take the first step. Communities should be willing to work with police to maintain peace and safety, but this can be difficult when trust in the police is easily lost. Some of this is due to a prevalent anti-cop narrative — which the media bears some responsibility for and will have to change. But as seen in Jefferson’s case, even well-intentioned calls to the police can end in tragedy and loss of innocent life. If police departments don’t shape up, fewer people will feel safe turning to the police for help.

Safety first: 3 ways to stay safe as a college student

Resentment creates a culture that demonizes police and emboldens anti-police sentiment and action, which in turn prompts police to view civilians with further suspicion. Distrust grows on both sides and violence is the inevitable result. We are already seeing this.

Police departments must see reforms. At the same time, we should think carefully before painting all cops with the same brush. Cops face tremendous pressure and stress. And some communities feel tremendous fear when dealing with the police. If this divide is to be healed, it will take a willingness to work together on both sides.

Benjamin Ristow is senior in history. The views and opinions expressed in this column are those of the author and do not necessarily reflect the official policy or position of the Collegian. Please send comments to opinion@kstatecollegian.com. 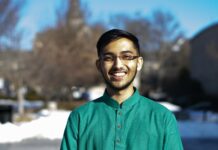 In My Own Words: Surviving attempts at character assassination

OPINION: The issues with both sides of the Turning Point debate...