In 2003, two professors from the music department proposed the purchase of a grand piano to the Board of the Friends of the Kansas State University Libraries

Despite a hefty cost and the consistent required maintenance, the board unanimously approved the proposal in an effort to enrich the musical and artistic culture at K-State.

The grand piano is the focal point of the concerts put on within the Hale Library Concert Series each year since 2006. Shortly after its purchase, the board came up with the idea that would become a four-part annual concert series. The series would feature musicians from the Manhattan area and beyond.

Associate professor of music and president-elect of the Friends of the K-State Libraries, Craig B. Parker plays a vital role in the series’ artist selection.

“I make recommendations to the founder of the series, Mary Ellen Titus, as to what musical repertoire could be featured and who the best musicians would be to perform that music,” Parker said. “The performers have been KSU music faculty and occasionally students, KSU music alums and talented students and other guest artists from throughout the country.”

Parker said Livingston is a nationally known performer of early music and is notably talented on both the organ and piano but was asked to play the harpsichord for this particular recital.

Prior to the fire in Hale Library in May 2018, the concert series was held in the library’s Hemisphere Room.

“The planning has intensified a bit over the past two seasons since we can’t host the concerts in Hale,” Martin said. “We’ve been really lucky to find some great alternate locations, but it does take more time for us to plan.”

Each concert brings out around 100 attendees who share in the cultural experience that was once hoped for by the 2003 Board of the Friends of the K-State Libraries. Any profits goes towards the upkeep of the piano purchased in 2003. The upkeep is particularly demanding since some damage was done in the 2018 fire at Hale Library.

“When the Board of the Friends of the K-State Libraries voted to purchase the seven-foot Mason Hamlin grand piano, it was done to enrich the cultural activities at the university and in our community, and in turn to acquaint more people with the ‘heart of the university,’ Hale Library,” she said.

While Titus stepped down from her role as president in 2003, she was still interested in the events at Hale and in the library itself. She said she is proud to look at the series 16 years after the piano’s purchase and 13 years after the first concert.

Parker said Titus was a key reason for the series’ success.

“Like many other musical endeavors in Manhattan … the Hale Library Concert Series was the brainchild of retired elementary school teacher Mary Ellen Titus and her late husband, Ralph,” Parker said. “Nobody has done more to further music in Manhattan than have the Tituses. Mary Ellen is still the guiding light of the Hale Library Concert Series and remains involved in virtually all aspects of this series.” 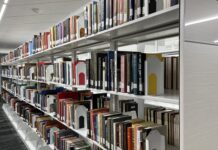 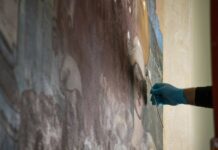 ‘We Are the Dream’ mural undergoes restoration, hangs again in Hale Library