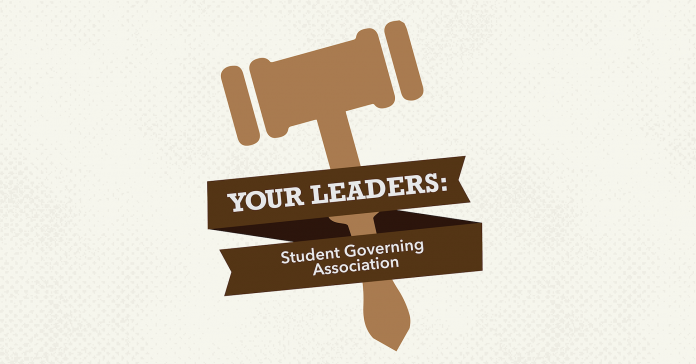 Wildcat Chamber was full of Student Governing Association senators on Thursday night as they listened to Jason Hilgers, Deputy City Manager of Manhattan speak about the Aggieville revitalization.

Hilgers said a sales tax increase is being considered as a way of providing funds for the renovations. The tax rate would increase from 8.95 percent to 9.25 percent.

“That .3 percent sales tax would generate over $3 million annually,” he said. “And that’s a permanent sales tax that we would look to apply towards more than just Aggieville — there’s several other projects that are included. With that, we have the North Campus corridor, we have a levy that we need to raise next our downtown by three feet, we have a runway out the airport that’s about a $50 million replacement reconstruction.”

“We are very excited about KSUnite; we’ve been working on it real hard since about February of March — a lot of good sessions and things of that nature,” he said. “About 20 sessions we put out a call [and] got a lot of good response. We got everything from religion to race to sexual violence, domestic violence. We got information on things like intersectionality and cultural learning — a lot of good stuff here.”

Samuel said most classes will be canceled, but the decision regarding classes that meet once a week or specialized labs will be left up to the instructor’s discretion.

In terms of an upcoming campus climate survey, Samuel said they will be working with a steering committee to help them determine what they need be thinking about and how they need to be approaching it.

“We know that we had some challenges and some things that probably didn’t go as well as we’d like,” Samuel said. “And our goal is to have a good product with this campus that we can deploy sometime in the not too distant future.”

A bill was passed to improve the SGA Elections Regulations. Andrew Booze, chair of Senate Operations Committee and sophomore in computer science, said the bill is important to avoid a repeat of what occurred during the elections last year.

“Really this bill is important to clarify a lot of definitions around how we define campaigns, campaign actions, the people that are working on campaigns and social media, as well as add more regulations on presidential campaigns so that we can regulate them more effectively,” he said.

A resolution also passed in support of additional privilege fee contract provisions. Student Body President Jansen Penny said the resolution will not change any of the fees for the next year and will be phased in over three years.