On Sept. 24, Speaker of the House Nancy Pelosi announced a formal impeachment inquiry into President Donald Trump following a phone call with the Ukrainian president. The impeachment inquiry has created a number of controversies between America’s two parties.

The impeachment inquiry began following a whistleblower complaint, in which President Trump is accused of forming a quid pro quo agreement with Ukraine.

“My knowledge of it is that they’ve opened an impeachment inquiry after they heard about a phone call the president had with Ukraine in July,” Joshua Willis, College Republicans president and junior in political science. “Basically, they’re trying to prove an allegation that he withheld military aid from Ukraine on the purpose that they didn’t investigate Joe Biden. … I’ve heard the phone call, I’ve read the transcript, I don’t see enough evidence that he personally withheld that aid.

Samuel Harper, junior in psychology and political science, is a self-described leftist who holds a very different opinion.

“The dirt was pretty bad; it’s obviously an abuse of power,” Harper said. “It’s definitely enough to impeach and convict a president, not to mention the 10 times he obstructed justice in the Mueller report, but those aren’t part of this, sadly.”

“I definitely see the perspective of the other side. To my knowledge, there are some Republicans in the room, but I think there’s hypocrisy on both sides,” Willis said. “To some extent, we want things to be transparent. … From the start, this impeachment thing has been unfair to the president. Republicans are finally deciding to stand up and say that enough is enough. Because of the context, I agree with what they did. We should keep national security in mind, the rules, but like I said, [Democrats] have been violating rules this whole time.”

The Senate GOP put forth a resolution on Oct. 25 condemning the closed-door depositions and demanding a formal vote be held. While a formal vote is not required to open an impeachment inquiry, prior presidential impeachments in the U.S. have begun with one.

“I thought it was appropriate to hold closed-door depositions,” Harper said. “What [the Republicans] did, that was illegal. They tweeted from within the SCIF, which, if some military officer had done something like that, they’d be sitting in Lawrence. The only thing protecting them is the prestige of the office. … They’re all banding together like sheep. You can always kind of make the argument that it should be public, which is what the GOP played into, but you see that they obviously don’t really care about that, because when the vote passed in the house, all of the Republican reps voted against it.”

Another talking point in the impeachment inquiry has been the crime itself and whether it’s solid grounds for impeachment. The Constitution is vague in this regard, listing only “treason, bribery, or other high crimes and misdemeanors” as impeachable offenses.

There is debate if President Trump is guilty of forming a quid pro quo agreement and whether is it enough for impeachment.

“The president doesn’t need to have everything listed out, what they should and should not do,” Harper said. “That falls within their oath taking the office, and he’s not held up that oath.”

President Trump has taken to Twitter to vent his complaints, referring to the impeachment inquiry as a “witchhunt.” His tweets have been a source of controversy since his election in 2016, and have since gained more attention.

“I think he’s done an amazing job, in terms of policies, while in office,” Willis said. “He’s done the most for our country of any president in a while, but some of the comments he makes, a lot of the tweets … people don’t agree with those, but they still support his policies.”

Regardless of how the impeachment inquiry proceeds, the upcoming election has encouraged students to get involved and voice their opinions.

While some wish for bi-partisan policies, others continue to have party loyalties.

“I’d like to endorse Sanders,” Harper said. “He’s shown that he can win and he was thrown under the bus hard in 2016 by the [Democratic National Committee]. Ten percent of his supporters went to Trump, and I’m sure they all regret that now, but he’s winnable. It’s sad if we get something like Biden, but anything’s better than Trump.” 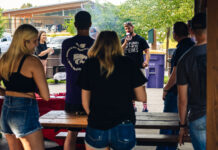