The Wildcats struggled in the first half against Monmouth Wednesday night but rode a 53-point second half to defeat the Hawks 73-54.

The Wildcats opened the game shooting one for seven from the floor in the first six minutes. K-State also struggled from three-point range, a trend which lasted the entire first half.

“Some were forced and rushed, and some were not part of our offense, and there were other ones where we were wide open,” head coach Bruce Weber said.

Monmouth jumped out to an early 11-4 lead with four turnovers from the Wildcats.

The Hawks then dropped four turnovers of their own in a nearly five-minute long scoring drought to give K-State their first lead of the game, 14-13.

The drought capped off a 12-2 run by the Wildcats in the middle of the first half, but Monmouth regained the lead with a three-pointer by junior guard Deion Hammond.

K-State finished the first half with a three-minute scoring drought and a 7-0 run by Monmouth.

The second half was a different story for the Wildcats, who outscored the Hawks 53-25 to snag a victory.

Sneed hit the first three-pointer of the game for the Wildcats at the start of the second half.

Then Murphy hit a three to take a 32-30 lead followed by a steal and layup by redshirt junior guard Cartier Diarra to bump the lead to four points. Once the Wildcats took the lead, they never looked back

The Wildcats iced the game with a jump from freshman forward Antonio Gordon on an assist from junior guard Cartier Diarra to take a 65-48 lead.

The Wildcats finished with 29 points off the bench, led by junior guard David Sloan’s 8.

“I think it’s just at halftime, before the coaches come in, we talk and the guys on the bench see what the guys on the floor are not doing,” Sloan said. “We just communicate, and they go in there the first five minutes and adjust. Then we come off the bench and try to just pick up where they left off.”

“It’s pretty balanced if you look at it, our bench has pretty good numbers,” Weber said.

K-State forced 25 turnovers and 17 steals, five by Sneed. The Wildcats scored 21 points off turnovers. The 17 steals tied for third in program history.

Sneed led Wildcats with 15 points, while Salnave led all scorers with 20.

The Wildcats shot 64 percent in the second half and 44 percent from three, which was drastically different from the first half.

Monmouth finished the game shooting 27 percent from the floor.

K-State will play Arkansas-Pine Bluff as 7 p.m. Tuesday on ESPN+. It will be the last tuneup game before the Wildcats travel to Florida for the Fort Myers Tipoff games. 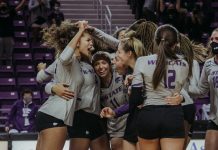 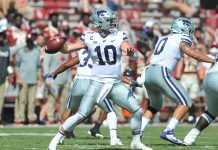 ANALYSIS: K-State wakes up in the fourth quarter, upsets Oklahoma 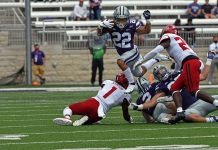 Freshman running back Deuce Vaughn steps up for Wildcats in upset