Kansas State volleyball took on two teams who were ranked No. 1 in the country at one point — Baylor on Oct. 5 and Texas on Wednesday night. K-State fell to both teams in three-straight sets.

K-State last defeated the Longhorns in its first and only Big 12 Championship in 2003, followed by a 33-match series losing streak. That dominance held up Wednesday, as Texas (18-2, 12-0) held K-State (8-16, 3-9) to a .118 hitting percentage. The Longhorns finished the night with a .346 hitting percentage with 11 team blocks and just nine errors.

On the offensive side, redshirt sophomore outside hitter Brynn Carlson led the team in kills with nine of the team’s 29 total.

Texas showed why they are the top team in the nation as far as hitting percentage goes, recording 45 kills on 104 attacks. Texas had three players score in the double digits, with senior outside hitter Micaya White leading the way with 14 kills and 18.5 points.

Texas held the Wildcats to a .133 hitting percentage in the first set while recording six blocks, but four kills from Carlson forced Texas into a timeout after coming within two points at 19-17. That deficit only grew as Texas proceeded to score six of the set’s final seven points and took the first set 25-18.

Both teams hit match-highs in the first set, as Texas finished with an impressive .452 hitting percentage.

The second set started with more hope for the Wildcats that slowly faded away. An 8-0 Longhorns run killed any K-State momentum. Texas ended the set with five of the final seven points, taking the set 25-16 with a .303 hitting percentage to the Wildcats’ .100, a match-low.

The Longhorns finished K-State off 25-17 in the third set with a match-low .300 hitting percentage.

Up next for K-State is the second edition of the Sunflower Showdown this Saturday in Lawrence. K-State sits just one spot above KU (7-15, 3-9) in the Big 12 standings at seventh. Both teams enter the matchup with two-straight losses. Game time is set for 1 p.m. live on ESPN+ and KMAN. 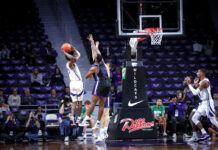