These citations cover possession, consumption, purchase or otherwise obtaining alcohol by a person under the age of 21. As a class C misdemeanor for people older than 18, it is punishable by a fine between $200 and $500, 40 hours of community service and completion of an educational program on the effects of alcohol.

“The Manhattan Municipal Court sets the fees associated with the offenses and ultimately Judge [Patrick] Caffey imposes the fines,” Captain Richard Fink said. “The RCPD has no say in what, if any, fines are imposed.”

Butler said he believes there is a reason minor in possession citations are going down.

“I believe underage users are making better decisions about where they consume alcohol,” Butler said. “Based upon college enrollment numbers there are fewer underage adults living in Riley County.”

“Fake IDs are part of the social norm in college, but it is really dumb and not worth the potential consequences if you get caught with one,” said Cameron Green, freshman in construction science and management.

A requested criminal intelligence unit report shows the monthly average of alcohol violations by minors in Riley County has decreased since 2012. 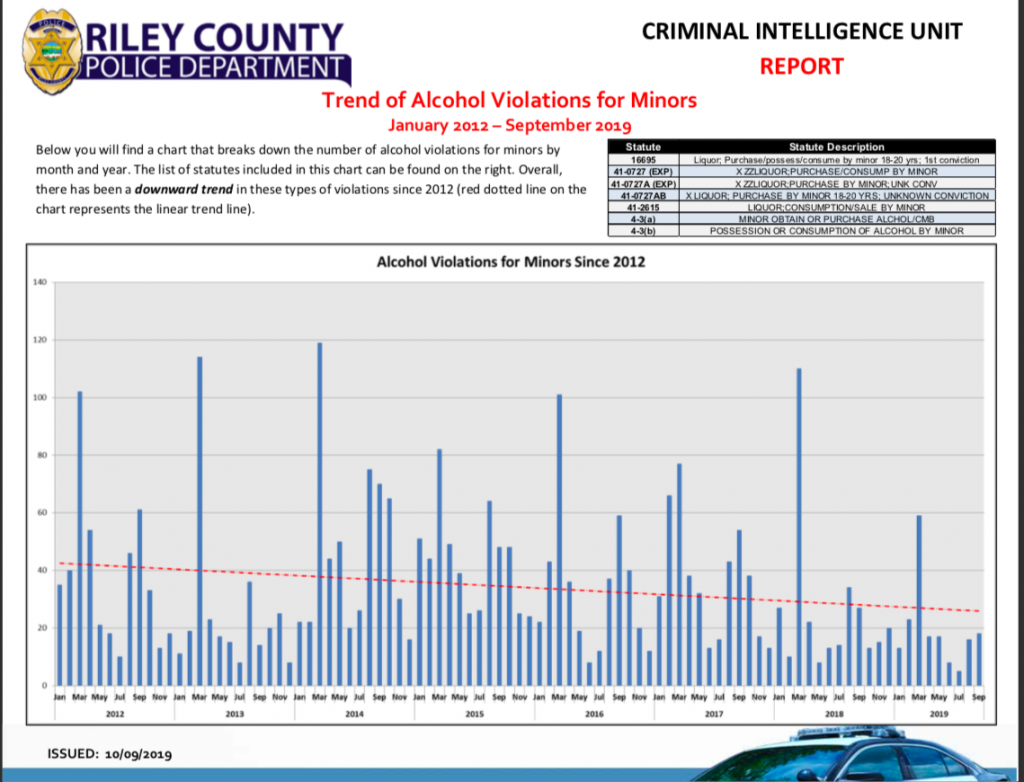 “I am not surprised that MIP citations have gone down in Riley County because students are realizing that if you drink in a public setting, you will likely get an MIP,” Green said.

The month with the most citations in Riley County, according to the report dating back to 2012, is March. This coincides with a Manhattan tradition: Fake Patty’s Day. From 2018 to 2019, violations decreased by almost half.

This could be influenced by weather — Fake Patty’s Day 2019 was considerably colder than 2018 with the temperature dipping down to the low 30’s.

“Most citations are through police officer observations and help from business owners,” Butler said.

Last Fake Patty’s Day, RCPD had the help of nine different police departments to reduce crimes. There were only 23 citations for a minor in possession on the non-holiday, down from 54 in 2018.

“We are proactive in educating the community in advance of the event and the morning of Fake Patty’s Day activities,” Butler said.

“Most MIPs occur in and around areas with high concentrations of underaged adults,” Butler said.

Another potential reason for the decrease is partnership between RCPD and businesses in Manhattan.

“We have been working with several entities, including Aggieville bar owners, to self-police and take a more prominent role in preventing minors from obtaining alcohol,” Sgt. Daniel Bortnick said.

The partnership with the businesses has dealt with alcohol beverage control laws.

“We have worked with businesses to educate their employees regarding [alcohol beverage control] laws and how to manage service to legal consumers,” Butler said.

Green has noticed a larger police presence in Aggieville on weekends.

“Around 11 p.m., a lot of police officers walk around Aggieville and sometimes they come into bars to potentially look for MIP citations,” Green said.

While the legal drinking age is 21 in the United States, the 2016 National Survey on Drug Use and Health found 19 percent of respondents aged 12 to 20 admitted to drinking alcohol in the last 30 days.

Until this semester, Kansas State required all students to take the Alcohol and Sexual Assault Prevention program on a yearly basis. In the 2018-19 academic year, 1.7 percent of the 2,444 new and incoming students under the age of 22 who completed ASAP’s Think About It program reported consuming alcohol daily and 11.2 percent reported often consumption.

In the same year, 3.5 percent of the 8,731 returning students under the age of 22 who completed the Campus SaVE program reported consuming alcohol daily and 20.8 percent reported often consumption.

“I think people drink underage because it is a societal norm in college,” Skylar Keaton, sophomore in business administration. “A lot of people drink because their friends do it or they are out meeting people and alcohol is almost always present in those situations.”